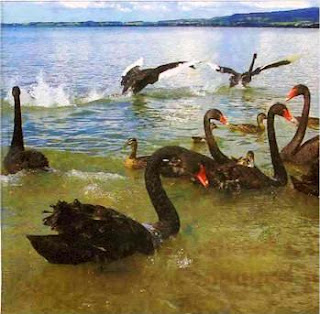 The idea of "Black Swan" events is something I have mentioned before, the original idea being from Nassim Nicholas Taleb.  Simply, it is something out there which you did not think could happen.  Now, in finance and economics they seem to be coming in flocks from cobdencentre dot org - Articles - Andy Duncan 29 March on the title below.

You may not have time to read all the articles. To help you be selective, those articles which I consider an important read or viewing, I have prefixed with X


• XX Blame Brown, Balls and Miliband for policies that led to the banking crisis


• Is this the endgame for the US dollar?


• Spectator: Folding money – When politicians devalue the currency, hard assets are the answer


• The Dominoes Are Lining Up, Again


• How Germany can avoid a two-speed Europe


• Lessons Learned in the Aftermath of the Banking Crisis


• A Nation Of Dropouts Shakes Europe


• Land of the Setting Sun


• Big players are no stranger to crises on own doorsteps


Oil and interconnectivity with Global economy


• House Prices Will Drop Another 20%


• The Next Leg Down in House Prices


• New house sales are at lowest level in almost 50 years


US Foreclosure and Mortgage Fraud


• Foreclosure vote could rock the banks


• House prices down 11% since summer


• Anglo to stop cost of living increases for pension scheme


• In US Public pension crisis threatens your wallet


The affect of Austerity measures


• Sign of the times: 200 join queue in Salford precinct – for the opening of a charity shop


• The Cost Of Living Just Goes Up And Up


• Why Is US Unemployment So High?


• X Centralization of power and control by elites in financial markets


• X The Origin of Central Banking and Possible Alternatives