AV But Are The Wheels Coming Off? 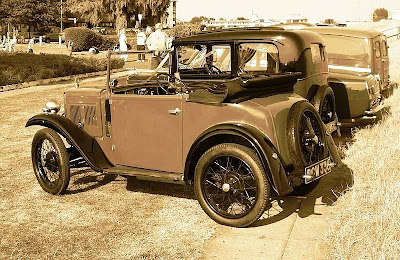 Changing the type of voting procedure in future general elections to determine in each constituency who will be elected is a little like putting a new bottom of the market set of tyres on an old banger.

This vehicle has a transmission with a serious whine, the big end has gone, the steering is unreliable, the brakes are badly worn, the electrics work only when they want to and the exhaust has rotted giving out a lot of noise with toxic emissions.

Meanwhile, Cable thinks that putting more passengers in the back seat will correct the steering and Clegg in the front passenger seat is using a sat nav that he bought from second hand shop but which is set for Brussels directions. The other passengers are fighting in the back over who should have most of the stuff they nicked from the car park.

This is a short description of the state of the British Constitution now. It always has been a creaky and idiosyncratic vehicle in which to go places but whilst just about or barely serviceable in the past is now destined for the scrapyard of history.

Unluckily, it is not just the politicians that are affected. The rest of us bundled into the trailer behind, recently refitted by New Labour with different wheels are having a bad time. This is because the wheels are square and cost more than a new Ferrari.

Today, on BBC News a pundit, whose name I did not catch, talking about Libya was asked what he thought our strategy was. He said the problem was that there was no strategy. More or less wherever you go now in the UK system of government you may find many fine words and incredible management speak but absolutely nobody who understands what “strategy” entails and what means are necessary to fulfil the ways.

We no longer have a “British Constitution” only a collection of theories, devices and departments which bear less and less relation to each other and seem to connect only to other bodies in other places. “Strategy” is now a set of knee jerk reaction to events and the demands of others elsewhere whether politically or economically.

The voting issue applies only to the Second Chamber, the House of Commons, if you can afford to pay the price of entry. The Upper Chamber, the House of Lords, has membership arrangements that would have disgraced the court of Nero and is about as useful as Caligula’s horse in dealing with our current problems.

So back to the voting system, the talk is that somehow the “first past the post” system is enshrined in our history. But the reality of the methods of putting people into the Second Chamber has changed down the ages. The present set up is fairly recent. What has happened is that this is a serious distortion of an already flawed system.

We have a Parliament now which is neither representative nor can discharge the basic functions of government. The changes needed are more radical than most can imagine for both chambers. It entails either a boldness of vision and the ability to carry through the changes on the part of one party or another or a revolution. If we do not get the first there is the inherent risk of the second occurring.

This has happened in the past and if our vehicle does go into the scrapyard and we do not have the money to buy a new one then we will be dependent on the transport that others will determine. So, either we have to find a new model fast or take on a decent second hand one. As I discovered long ago the one pictured above, alas, will no longer take the family or the luggage.

The AV business is a botch job and our car is at the point when we have already had one too many.
Posted by Demetrius at 16:30