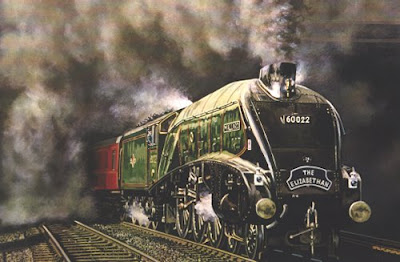 Apparently BAA have dumped the project to provide rail links from Heathrow to Reading, Guildford and London Waterloo because there are issues with three level crossings in Richmond and there is a lack of money. The figure suggested was £650 million.

The Reading connection would have allowed access to the Great Western main line and to other destinations, notably Oxford and beyond to the West Midlands via Banbury, Leamington Spa and Coventry to Birmingham.

Also, Chiltern Railways have announced a significant speeding up on trains across its network, notably from Birmingham and other West Midland destinations to London Marylebone. There has been a good deal of work done on improvements and newer trains are planned. More would improve matters further.

Meanwhile, Virgin Rail continues to run its services with a good degree of frequency between Wolverhampton, Birmingham, Coventry and London Euston. With a few added track and station improvements here and there some speeding up is possible.

In short it was feasible to have put in place rail services from Birmingham and area to three different termini in London with one going via Heathrow.

It does not end there. Because it would have been possible to start a train at Manchester Airport, run it south via Crewe to Birmingham Airport through Birmingham New Street and then on to Heathrow finishing at the vacant old Eurostar platforms at Waterloo.

Other stops could include Stafford, Coventry, Leamington Spa and/or Banbury, Oxford and Reading as connecting points.

But oh dear me no, this would be a boring old bits and pieces series of projects that would not grab the media headlines. Has any of the media paid any attention to the way the development of the Chiltern Lines has improved communications in the South Midlands?

It would be about actual real transport needs for the ordinary persons on ordinary incomes who just want to get from one place to another at reasonable time and cost with options for wider use. It would mean real choices not only from Birmingham but from the several parts of the West Midlands.

It is difficult to see the BAA decision as anything other than as an early casualty of the HST2 project. There are going to be a lot of other casualties across the network and added costs and worsening services for everyone else if the HST2 goes ahead. The collateral damage could be extensive.

Does nobody in government understand that real growth that can be sustained does not come from throwing huge sums at limited prestige projects on a basis where the only growth appears in the accounts of investment banks but from detailed hard work across the economy in general in an array of smaller and more profitable efforts?
Posted by Demetrius at 16:11