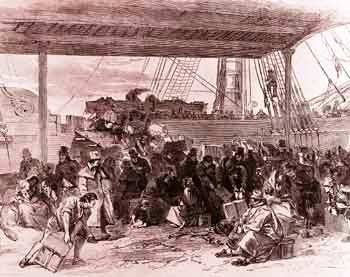 Having seen that there had been a debate about the TV mini series on “The Kennedy’s”, thought I would see how it went. It is certainly a glossy effort with high production values. Also its measured filming avoids the messiness and difficulties of a great many other series and has some subtle touches that may miss a great many viewers.

But there is a dark secret behind the Kennedy story, a shame that cannot be admitted and something which would astonish many people. It is that the families earlier origins are probably lower middle class in the context of their time.

How many amongst us today are prepared to admit that we too have family and forebears who can be defined as lower middle class?

My first twitch was when I picked up that in 1849 when Patrick Kennedy, great grandfather to President Kennedy, sailed from Liverpool to Boston he was on the steam packet “Washington Irving”. This was not a “coffin ship” or one of the ordinary kind.

A near cousin who researched Liverpool shipping, specifically those of the early steam period and who knew her grand aunt born in 1842 to a maritime family would have had little doubt that this passage, even in steerage, was better than most.

A basic source for looking at Irish families in the period 1830 to 1870 is the Griffiths Valuations of the taxable lands of each county. It is not a simple business to track down the actual holdings of many individuals and especially extended families.

Even then to judge the actual worth of particular families and relevant status in a parish or small town needs a good deal of experience and care.

When Patrick was over in Massachusetts he was soon farming and then when he died young in 1858 his widow was able to move into East Boston as a storekeeper. This was not riches or high status but it was not the labouring class.

There was a category difference between immigrants who landed with a modest amount of family money (or dowry) in their pockets and those who had little or nothing.

Patrick and Bridget Kennedy may not have had much by modern standards but if they had at least “starter funds” it would make a critical difference. This suggests that whilst the families they left may not have been rich there may have been just enough to give them a start.

Additionally, the education that her son, Patrick junior, and grandson, Joseph had was of a high order, enabled them to progress rapidly and because of their intelligence and ambition led them on to wealth and power.

This in turn led them to be amongst the Irish Catholic community that set up a rival elite to that of the old Protestant Yankee’s. From that base came the capture of political power in Boston.

The Kennedy’s were in place during the period 1870-1900 when the USA was expanding and rapidly industrialising. Wealth was both found in gold and silver strikes and on the basis of cheap labour. It was a good place for the City of London to invest and the returns were higher than in many parts of The Empire.

The Civil War had hit the prosperous trading ports and small industries of The South so the economic and financial future was with the North and those who had the money, education, network of contacts and preparedness to take risks inside and outside the law to achieve their ambitions.

It is intriguing that many of the people who were around in Liverpool in 1849 were of the same type of Irish background and from the same district as the Kennedy’s, tradesmen, shop keepers skilled men in supervisory jobs.

They all had a bit of education and the ability to see their children through elementary school but did not seem to have either the opportunities or the avenues for the same kind of progress in higher forms of education.

The crucial differences were the education that could be had, how far it might take you and the access to credit and to a functioning network of established people on the way up themselves.

That this did not happen to the Irish in the towns of England tells you a lot about the education and social structure.

It will be interesting to see how the series works out as a whole.
Posted by Demetrius at 16:01