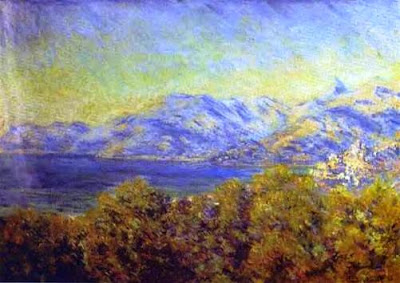 Looking at the news item filmed at a railway station on the Franco-Italian border of the refugees from Libya seeking entry to France the station name Ventimiglia came into view. It is a long while since we were there.

It was a day trip across the Italian border to take a look and coming down the road into the town we stopped at a viewpoint. It was much later that I discovered it had been the point at which Claude Monet had painted his view of the place.

When Monet was born it was not a border town it was well within the Kingdom of Piedmont which had also embraced Sardinia during the many and various wars of earlier centuries.

Piedmont was forced to give up the territories of Nice and Savoy to France at the time of the Reunification of Italy in 1859-1861 as a consequence of one of Emperor Louis Napoleon’s grubbier deals, essentially “I help you control Italy you give me lands without conquest”.

In 1940 Benito Mussolini made the catastrophic decision to go to war in support of Hitler on 10th June. Had he kept his wits about him declared for World Peace and sought out help to broker a peace deal, notably with Joseph Kennedy Senior, USA Ambassador to Britain who had a good many Italian voters in his home base in Massachusetts, the world might be a different place.

Who knows, could Italy have been able to force the return of Nice and Savoy? After the war, Italy shorn of its Empire and key trading links had to start all over again. One arrangement made by the winners was to stitch together Cyrenaica and Tripolitania into a new place called Libya. Now the bills are coming in.

On that brief visit we made to Ventimiglia Italy was going through one of its occasional economic and currency crises. We went into some shops and all the noughts strained my limited powers of mental arithmetic, luckily the children were with us. Worse was that there was no small change to be had nor small value notes.

Currency exchange had been intricate the year before when we went along some of Wellington’s lines of march in The Peninsula. In both Spain and Portugal just after the death of Franco and the Fall of Salazar there was a lot of negotiation to be done. With the pound sterling rapidly falling in real value in the UK just what a cost was took some working out.

But I had an American Express Card that soothed a number of nerves and even the banks were happy to have me use it. Even although I was British the notion that dollars might be involved gave them a degree of confidence.

The Euro, of course, was supposed to end all that coupled with the integration of sensible policies and wise financial management of governments supported by banks who had a wider range of instruments to enable market fluidity and being international in scope could check and control any burgeoning crisis.

The theory was nice but the practice fell prey to all the old human weaknesses. Now regimes are beginning to collapse or at least change radically. All those migrant workers in many places want to go somewhere else and are joined by many of the locals who are being bombed, displaced or subject to ethnic or religious prejudices.

In Ventimiglia the Italians are trying to pass on to France large numbers, mainly young unemployed men, who have left Libya and who neither want to or are willing to go back to wherever they started from. Italy itself is poised for a major crisis. Had not so many French, German and other banks taken its debt it may well have defaulted.

If Italy goes the way of Portugal, can the Euro survive?
Posted by Demetrius at 10:59