Mine Was A Pint But Not Now 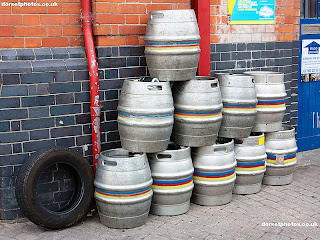 Amongst the bits and pieces this week was not only the Dave Clark Five song on BBC4 from April 1964 that made number one in the charts but an item on Punch Taverns also a high rated business performer until recently. It contrasted the wealth gained by those at the top from their highly leveraged operations in the pub sector with the fate of many of the publicans they have left behind.

As with other areas of activity the essence of the operation is not selling beer and food. It is about marketing a brand, extracting the maximum returns, aka “rent seeking” the first principle of economic activity for our government and its friends, and when the opportunities arise take advantage of the idea of the pub trade as a portfolio of property opportunities rather than as anything else.

There have been other things that have had a major impact on the pubs, the drink driving restrictions, the smoking bans, the deliberate changing of their customer base to family rather than adult in the blissful notion that we would all go continental in our social habits and all the employment laws that have more or less put many pubs now on agency based staffing.

In the district where I now live and the places where I lived before it is difficult to find a pub that has changed little in the last couple of decades. Also, they are now much more expensive places to go to and finding food that does not come out of a box or packet very difficult. Once it was routine to visit one now it is a rare event, indeed it much be over a year since the last time.

This is the effect of “rent seeking” or the Economics of Extraction. So long as you can maximise what you can and then get out with your money it does not matter if you leave behind the wreckage of a system or service and which carries a huge burden of debt into the future. Much as Punch is alleged to be leaving behind some £2 billion resting on the shoulders of the publicans and managers of the pubs and places that are left.

There have been other examples of this recently and in the public sector there are the equivalents in the many and various PFI deals. Those who were in at the start cash in when it is time to go and leave the consequences and the debts to others to sort out. It is a process which will take decades and which will impair and in some cases destroy what we have had in the past.

For those with an eye on economic and political history the empires of the past have often been other versions of “rent seeking” financial operations. In our arrogance in recent decades we assumed that because of ability of the City to do this across the world to the profit of London that this would earn us our keep, along with North Sea Oil.

What we did not reckon on was that this would turn against ourselves as finance became global and the companies escaped the restrictions of the states they were based in. Now we are the ones at the wrong of end of all this “creative destruction” in the name of gain and across our cities and towns and almost all across rural areas we are looking at the increasing scale of the damage.

And it will all have to be paid for and we shall have little to pay with.