Zombie Economics - The Past Destroying The Future 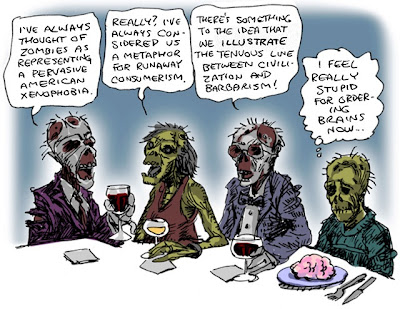 Satyajit Das in “Naked Capitalism” has an item about what economics is supposed to be and what is actually going on at present.

He refers to John Quiggin’s view of “Zombie Economics – How Dead Ideas Still Walk Amongst Us” that suggests that most of our troubles have been the consequence of following theories of the past, not only from economists long dead but some still living.

The other two authors also are trying to rearrange their mindsets as to what is going on at the moment. The three of them are said to be towards the “Left” although what we have had that we thought was “Left” was anything but that.

In the Grauniad today, Lynsey Hanley argues that Labour must shed its need to see itself as a UK working class party and rise above such a grubby and compromised past to be a party of vision. Metropolitan Liberalism rules OK and to hell with the workers.

Personally, I have argued already about the need for us all to ditch all the old “isms” and notions from the past such as “Left” or “Right” because the world has changed so much all they do is clutter up our thinking and lead to poor decisions and poorer policies.

A major issue is that so many of the published economists and their followers today are paid hirelings of one established body or another and obliged to march to the tune played by their sponsors. They are even less reliable than any of the UK Big Four accountancy firms who are long on theory and short on arithmetic.

Anyone for tennis?
Posted by Demetrius at 17:01