Cameron And The End Of Empire 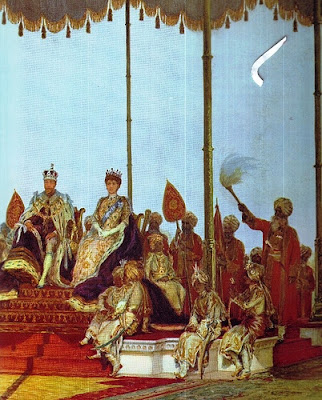 Whatever the problems around the world today in which members of the political elites of the past based in the United Kingdom played a part quite why I should have to fork out money when I had nothing to do with any of it is beyond me. Certainly, I was alive in 1947 when Pakistan was detached from India and the issue of Kashmir arose but what was going on there was rather beyond any of my doing.

It is my generation who had to live with and sort out the mess that the Empire became after World War 2 and following. It was then a period of high taxation beginning with a long period of austerity.

Our parents had no say in the matter or much that went on. For many of my age it is likely that not all of our grandparents had the vote at any time and for many none of the great grandparents. That they may have been taken in by the propaganda of Empire or not does not matter, they had little or no say.

So quite why all the sins of Empire and the rest should now appear on our bills to satisfy the government’s political whims is something of an insult. Additionally, it may have escaped the notice of Mr. Cameron that many of the present population and their recent family have come from other shores and from the Empire.

Quite why all these recent arrivals should be dunned for the collateral costs is another issue. What does add injury to insult is that so many of our present political elite and their associates who are running around doing the “bleeding heart” act themselves go in for a good deal of tax avoidance and possibly some tax evasion. So they aren’t paying, we of the lower orders are.

It is a fine irony that a nurse of West Indian origins who is paying a good slap of tax is being told to pay towards the errors of politicians, civil servants and others made during the time of her grandparents and earlier generations by the descendants of those people who have escaped the tax net.

There is the other matter of those towards the bottom of the heap in the UK whose British and Irish forebears were also numbered amongst those who did not do well out of all the wars and in fact did rather badly. “Empire” in its pomp was also about Free Trade. This was sold as cheap food for the masses but came at its own price.

It was about the Economics of Extraction practised in other lands. It enabled low wages and in the country the Great Agricultural Depression with even lower wages and the eventual destruction of rural life and culture. Go out into the fields and the villages and see how many lower income true Brit’s are to be found.

Perhaps Cameron might find time to study the levels of industrial deaths, accidents and disease that abounded in the past and not least some of the horrors of child and female labour. There are many today who see the Welfare State as some sort of compensation for what happened in previous generations.

Essentially, it was the then political class in London with their City financial and wealthy provincial supporters that got us into Empire and demanded its relentless expansion. This went to the point, as in all booms, where the growth was unsustainable, incurring heavy costs to the UK population and its management became impossible.

Then it went up in flames and our forebears paid the price in major wars. So the latest London elite’s demand that we should continue paying for the gross errors made by their earlier families is another of the injustices of Empire.

In the meantime our governments carry on bombing.
Posted by Demetrius at 13:46