Pain On The Train 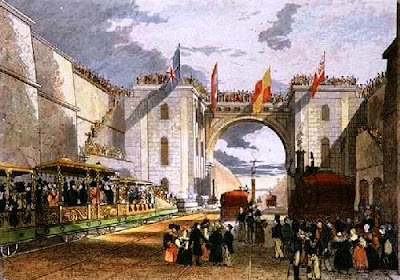 Amongst the many murky financial dealings of the last government the rail business is almost in a class of its own. As taxpayers we have been paying heavily for the privilege of having services provided by theoretically either commercial companies or substantially state owned agencies answerable to nobody except their financial advisers who have reaped rich dividends.

As passengers we have been living in a mysterious wonderland of guess the fare and find the service that has become increasingly complicated and also loaded against us. Get on the train without a ticket because the ticket office is not open and the machine won’t work and be hammered with penal fares.

Get off or on at a station that shortens your journey and also get hammered. Get on a train at the wrong time because that at the right time has been cancelled, guess what? Be on a train that is rerouted on a different line because a time target must be met or be dumped on an unmanned station late at night in the wilderness and find you own way home.

One of the best ones I saw was a train that finished up stranded in a power station siding because of some sort of mix up which left passengers several hours late in the early hours of the morning with all the respective parties denying liability.

The weird world of Network Rail is a subject much covered elsewhere with the boss of a government department (basically) able to retire young to a highland estate. The renewal of rolling stock has been an incredible giveaway to foreign firms. That many do not fit platforms here or there has not been a problem.

The companies were released from the obligations of Health and Safety over passenger accidents and the reporting and inspection of incidents relieved of the necessities of truth or on site examination.

Now tucked away in the back of the media we hear that HS1 the much trumpeted new High Speed service in the South East has been sold off fast to a Canadian outfit. The details are not clear but it seems that the UK end of the new high speed lines has been quickly dumped by the government.

On previous posts you learned that I am not entirely surprised that things did not go according to plan, but then I have only been travelling these seventy years or more around several countries and have actually done some railway work.

It is simple really. People pay money to travel by train and it is and always has been a significant cost to anyone on average or the ordinary run of wages.

On the new South Eastern HS1 service there are two main branches. The run from Ashford in Kent to London does save a good deal of time, but at a cost. The time taken from Dover and Ramsgate to Ashford was only a little quicker.

On the other line beginning at Faversham after Strood an HS1 journey to St. Pancras takes 34 minutes, exactly half the time of a stopping Charing Cross train.

However, if anyone works or wants to go to say the West End, Covent Garden area or close to London Bridge or Blackfriars then the half hour saved by HS1 is lost in going to any of those districts.

I know because I have done it. The times I did were because of weekend engineering works on the usual lines that were not convenient. Also as Underground stations go, Kings Cross St. Pancras is a good one to avoid.

What will happen now on HS1 is not known. What we do know is that South Eastern Railways lost a lot on the service and their takings are down also on other services.

The reductions and messing about with timetables to enable them to avoid any increase in staff numbers for the HS1 has increased car use and led to numbers of commuters moving house to other services. I doubt that if any of those reductions will be reinstated or any improvements made.

At present around the country a lot of the existing companies are looking hard at their accounts, potential liabilities and services. If there are reductions in the non ring fenced rail subsidies then it is likely that that fares are going to go up a lot more than inflation and trimming, reduction and some closure of services is likely.

What therefore is the governments Big Idea? Yes, indeedy, around £30 billion for an HS2 new line for the relatively short runs in England covered already by competing services. £30 bilion is of course the starting offer. A person who has actually read some rail history knows that almost invariably the start figure is laughably short of the final cost.

But we have a media fixated on Big Ideas. Together with big finance, big government, and big debt loadings what we get is big mistakes and even bigger bills for the taxpayer to pick up. What is hard for all these to cope with is the ability to look at the detail and get down to the detail.

This is no longer the way we work. It is not “sexy” or “big deal” or wow wow “Prestige” with the big “”P”. It is just hard work, co-ordination, real planning and a concern with real service.

Take London to Birmingham for example. In 1922 the fast morning train from Paddington to Snow Hill took two hours. The equivalent London and North Western train took two hours and eighteen minutes to New Street, the delay caused by the need to take off coaches for Northampton at Blisworth.

Today the New Street trains by Virgin are rather faster and the Chiltern Line trains from Marylebone to Snow Hill around the same as 1922 but stopping many more times. It would be possible to speed up either or both and to link them to the HS1 and Eurostar tracks at St. Pancras and all for a lot less than £30 billion.

If you wanted to go north also the routes are there on existing tracks. There are many possibilities and believe it or not there is the “Big Idea”. It is to have a system of electrified rail links on a standardised traction basis covering the whole UK. This will link not only all major urban areas but airports and seaports as well.

It is the big decision Labour flunked in its period of office from 1945, again in the 60’s and the 70’s. The Blown Labour government (Bl + own) handed the railways over to the financial sharks.

Can the Conservatives and the Liberal Democrats finally wake up to what is needed, scrap the HS2 and get down to the detail and the basics?