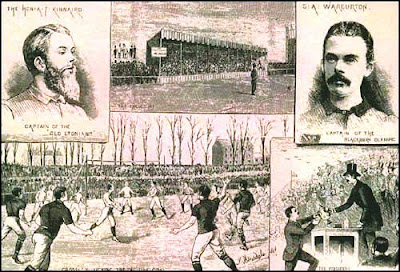 What on earth is Dave The Suave doing cosying up to the Soccer industry? As a business model alone it is an investment to avoid at all costs unless you are in either money laundering or the provision of personal services.

Could someone please supply him with two lists. One should be of the once great clubs now down and out. The other should be the present clubs in the top leagues whose finances are questionable.

Then perhaps there might be a file of clippings about some of those chaps too many politicians scramble to stand at the side of for photo opportunities. It would not go well with protestations about family values or traditional qualities that he and others burble about in their bids for votes.

At No. 10 Downing Street it seems there is a panic to help England (why England, why not Scotland or Wales or one or other of the Irelands or the Isle of Man or Guernsey?) secure the right to stage the 2018 World Cup. Lundy perhaps?

This is an event that has around 80 games of football of which about half a dozen will be interesting or watchable for the benefit of TV companies, assorted sponsors and an international elite hoping to extract both prestige and pockets full of money.

Despite austerity the taxpayer directly and indirectly (especially if the BBC is involved) will be making a hefty contribution. As a TV enterprise they will do this despite being able now to watch any of the games either on TV or computer from anywhere in the world at any time.

Whilst a number of spectators will be at the games, mostly thinly attended, they will be a minority who can afford it or who are freeloading at the expense of us all.

Simon Jenkins in the “Guardian” (this is a new one me agreeing with it) objects to the BBC being put under pressure to “pull” a programme scheduled before the voting on the decisions for 2018 that suggests that a lot of dodgy dealing has taken place.

It is thought that the Football Association was urged by 10 Downing Street to try to stop the potential embarrassment of FIFA with the risk of England losing the vote. It would not be good for Dave to turn up there waving the flag only to be a loser.

Possibly the BBC is up to something linking Dave to a body that works in even more mysterious ways than the International Olympics Committee, the body that has demanded and obtained Zil lanes and special traffic controls for its members.

Here is the Big Idea. In the modern TV saturated easy transport world what is the point of The World Cup at all now? Just as cricket in international terms has become more or less a continuing league system why doesn’t some TV company organise a World League with promotion and relegation.

Say 8 teams to a division with one up and one down and make the whole thing a properly run commercial entity without all this secret elite goings on?

Can you hear me Rupert? And can you have a word in Dave’s ear?