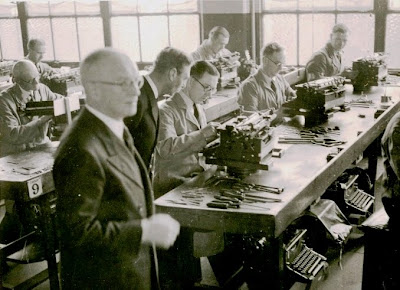 The C4 “Dispatches” last night, Monday 8th, dealing with sweatshops and serf labour in Leicester took the lid of a very nasty business that has been running for some time.

We had all the usual spin from the bosses and financiers about their deep ignorance of where the profits were coming from and how and all the paperwork they had saying that all was for the best in the best of all possible worlds.

I do believe that too many of these people were gaining too much personally from the way these businesses were conducted.

To add another touch to the issue of belief and disbelief, I believe that throughout the fashion industry and the associated celebrity culture the great majority of those involved are well aware of how the money was being made and the conditions.

Literally for every snort a serf works for a week and still may not be paid. The effect has been to put very many into debt slavery, a condition that few of them are likely to escape.

It has to be said that this problem has been building up for some time. It is very likely it existed in a lesser form before 1997 and the pre-conditions were there for it to turn really bad. Since 1997 it has gone wholly out of control for the benefit of all the usual suspects.

There was one error in the programme I did identify. It was the community worker who used the word “slavery” to indicate his opinion. He said it was as bad as employment conditions were in Leicester 100 years ago. He was wrong. It is much worse and the nastiness is a great deal worse.

There is a grim irony. The particular sweatshop shown was located in the former Imperial Typewriter Works an award winning factory built in the 1930’s and regarded as a model its kind put up by a company that had a deserved high reputation for its treatment of and facilities for workers.

In November 1946 it was visited by the King-Emperor George VI who still was ruler of a vast empire then including the Sub Continent of India. See the Pathe clip, although the factory shown is another one.

My photograph above shows HM The King at an assembly bench at the Imperial Typewriters. You can see it was a well laid out, airy room. There were also canteen medical and recreational facilities. The wages compared well and there was a real pride in the firm. The London offices were on Kingsway at Imperial House.

The sports fields were a couple of miles away with several pitches, tennis and athletics facilities and decent changing rooms. Their Chess team ruled the roost in the County and beyond, largely because of Polish recruits. When a Grand Master came for a simultaneous match with the local chess elite the Imperial men were rarely beaten.

The modern sweatshop in the building had none of these things, the fire exits were blocked, no ventilation or facilities of any kind, it was in the basement and it was filthy by any standard.

Built originally purely for storage of engineering parts during the early 1940’s it was used as a key local air raid shelter because of the strength of the structure. When the C4 film started it gave me a nasty jolt, because I recognised it all too well having spent too many unhappy hours there.

There were lighter moments, such as the practice fire drill that owed more to Buster Keaton than to the intentions. As for the Pathe clip, if you watch it I was on Spinney Hill Park with “Tebbs” Lloyd-Johnson (Google him) who then lived overlooking the park as the King and Queen went through.

He was around more than 100 years ago along with many others I knew and later worked with. He had moved to a growing city which had a rich culture and opportunity. Many economic migrants arrived in the early 20th Century because it was a good place to work and live.

The Luftwaffe did not get the building and the company, it was the UK government and the economic planners that did followed by the asset strippers of the early 1970’s. It went very badly wrong and turned nasty in the 1960’s when the firm like so many other Leicester firms hit the skids.

Twenty odd years of having their profits and revenues creamed off and ambitions frustrated did for them. As a one time prosperous town, like most of the Midlands Leicester was treated as the cash cow for subsidies and development expenditure elsewhere and many firms, such as Wolsey suffered as well deprived of the ability to compete fairly or effectively.

Meanwhile down in London the celebrities that the sweatshops fund preen and parade and those who run an industry based on this sit in judgement on government, are lauded for their riches and incidentally remove most of their wealth to tax havens.

Welcome to British Freedom 2010 Style, the Land of Lost Content.
Posted by Demetrius at 15:17