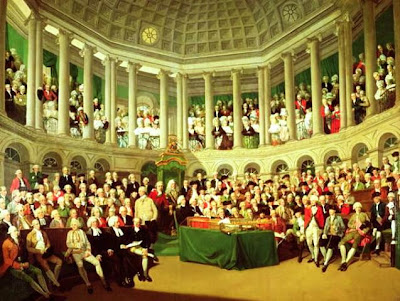 The news that George (or Gideon) Osborne hopes to contribute a large figure to the Irish bailout prompted one Wikipedia using journalist to discover that he is the heir to the Baronetcies of Ballintaylor and Ballylemon in Ireland. The Irish Ascendancy is an obscure area of study now, left to genealogists who have given up hope.

But I like to play “Hunt The Nesbitt”. It is amazing how often one turns up related to the most unexpected connections. But as our urban fox knows from chasing the squirrels they can be hard to find. You just have to chase here and there.

So rooting around George’s ancestry and its wider connections I was seeing all the familiar names of Irish politicians, lawyers and military men of the 18th Century and the bell went ping when the name of Frederick Trench turned up. This meant the Eyre’s as well as others and he was the man who knew and was related to Nesbitt’s.

He was executor to the large will of Cairncross Nesbitt of Aughamore in County Longford, a man whose Nesbitt connections were extensive. They include Arnold Nesbitt, a man I have written about before, who was central to the financial and economic collapse of 1772 and after.

So Irish bailouts and financial disasters are in George’s genes.

One news feature on the BBC has been a presenter interviewing plaintive students about their job prospects outside Trinity College, Dublin. They talk vaguely of going to places where jobs are even fewer than they are in Dublin. Perhaps they might have read economics and management but not history.

The Dr. Jeremy Taylor at the head of this blog was Chancellor of Trinity in the 1660’s after the Restoration and the aphorism quoted could apply to bankers as much as princes or modern politicians. He had a sharp eye for human frailty and hubris. There had been enough to witness in the previous thirty years to 1660.

Ireland was broke at the time. King Charles I had been a financial disaster and the Commonwealth had failed to do better. Matters did not improve much over the next three decades and more after 1660, the Atlantic Isles generally staggering from one financial crisis to the next with the monarchy propped up initially by French subsidies.

It was only after the cousin and her husband of Taylor’s son-in-law, Archbishop Francis Marsh of Dublin, that is Queen Mary II and King William III brought in European financial experts in the shape of the Dutch, Huguenots, Flemings and Sephardic Jews to sort out the city and the Exchequer with the help of a few Scots that some sort of order began to be established.

The 18th Century had its ups and downs and the Scots-Irish and others found their way to London to join the fun. Population began to increase rapidly and a basis for wealth increase beyond slavery was founded. From then on it was London and not Europe that had the job of avoiding total economic collapse.

It was a very near thing at times until the 1840’s, as that famous Irishman Arthur Wellesley, Duke of Wellington, observed in 1825, they were three days away from barter. But in the 1840’s a major collapse occurred in which a spiral of famine, the collapse of credit, hunger and death led to another direction in economic affairs.

Between then and 1922 the Agricultural Depression that began in the 1870’s combined with the serial bungling of London governments too concerned with The City and too ignorant of the developing needs led to the Irish breakaway.

This may have been independence of a sort, but it was never financial or economic because the Irish punt was tied to the pound until 1979. The UK crash of 1976 and after was one too many. In the 1950’s and 1960’s I saw that much of Ireland was still desperately poor.

This meant that all the ups and downs of sterling, errors and miscalculations of London governments between 1922 and 1979 impacted on the Irish economy both directly and indirectly. In my view Ireland should have broken the link at least in September 1949 when the UK devalued the pound against the dollar by 30%.

For twenty years after 1979 to 1999, managing its own currency and benefiting from European subsidies together with general economic growth and with oil now cheap, Ireland began to prosper. It was uneven but they were going in the right direction.

Then in 1999, leaned on heavily by the Brussels mafia they entered the Euro system and surrendered control of their monetary and financial policies. To compound the errors the government allowed Ireland to become entangled with the web of tax havens centred on the Wall Street-City of London nexus that allowed credit to run totally out of control.

The two did not mix. At first Ireland more than others had a runaway boom and then a runaway disaster. It has meant a surrender to Europe almost taking it back to the 1660’s. What must be worse is a smiling son of the Ascendancy now based in London offering to help, with conditions, of course.

May I recommend reading Dr. Jeremy Taylor? In his “Holy Dying” Chapter 1 he discusses how Man is a Bubble and in “Holy Living” Chapter 2 he deals with fancies of vanity, sudden advancement and great fortunes but the need for humility.

The earlier Osborne’s would have had copies on their bookshelves.
Posted by Demetrius at 17:46