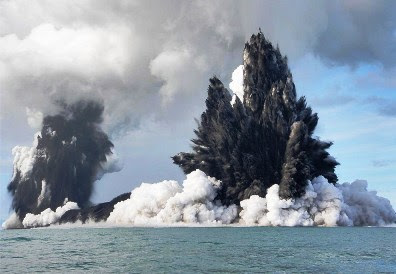 There has been another volcano up recently, Merapi in Indonesia. The authorities there suggest it could be continuing for some time. What has been mentioned but little reported is the sundry other rumblings at around 120 volcanoes in the vicinity.

Despite all the major advances in chemistry and technology volcano watching is still a very difficult business. These added twitches may mean something little or big or nothing at all. We know that eruptions can cause unexpected major problems, as happened earlier this year with a minor Icelandic one, but we have not had one that is a real belter for a little time.

There are a number of theories about the end of the Neanderthals, a humanoid species parallel to our own which died out some tens of thousands of years ago. A case has been put forward for one major cause to be a series of large eruptions in the Caucasus around 40,000 years ago which changed the ecosystem of the north on which they depended.

It was some 75,000 years ago that a very big blast from Toba almost wiped out humanity, it is alleged. It reduced us to a few thousand people who developed habits of acquisitiveness and violence that ensured not just our survival but our conquest of other species and occasional collapses of societies and populations.

Santorini in the Eastern Mediterranean did for a number of civilisations around that part of the world around 3,500 years ago and triggering new forms of political organisation and method. The new techniques of deep sea investigation have found another potential big one deep down not far away.

In the Roman period we had Vesuvius, a modest one really. Again it seems that under the water nearby there is a potential bad one. After the Roman Empire retreated from Europe there was some kind of climatic severe disruption in the 6th Century with consequential disasters for humanity. There are various theories on this one, but one suggestion is a major Krakatoa event.

Also, the ending of the Medieval Warm Period in Europe with a number of disastrous effects has been suggested as the consequence of climatic disruption occurring after a series of eruptions in South America. More recently we have not long been made aware of the effects of the rupture in the Laki fissure in Iceland in the 1780’s.

This was followed by other eruptions around the world with a major one at Tambora in Indonesia in 1815. One way or another these led to major depopulation of the upland areas of the Atlantic Isles. The one that has been extensively featured in film etc. is the 1880’s Krakatoa blast that reminded us of our vulnerability.

At the moment there is glacial melt occurring in Iceland. This is being put down to a minor volcano which pops off without much effect every five to ten years. The worry is that it might be due to an after effect of the earlier eruption of this year. Experts think that one can lead to a bigger one not long later along the way. Perhaps, but if that triggers Laki again it is time to find out where you put the old gas masks.

There are other possibilities. The doomsday merchants point to lively activity up in the Aleutians, maybe associated with Kamchatka. This could be hefty. Also the mega chamber at Vanuatu is rumbling quietly away, but then it always does. Inevitably the Americans have to go bigger and better with the rising ground levels in Yellowstone giving the prospect of North America being covered by an ash cloud.

Back in 1939 one of my uncles found himself on HMS “Scott” sailing to Grenada after Kick ‘Em Jenny, an undersea one kicked in to everyone’s surprise. There was little known about these at the time. Since then many have been discovered, including some very big ones. Really deep down there are vents continually on the boil. They matter because they could affect sea warming and therefore climate.

Prediction in this field is a dangerous game. You can make yourself very unpopular and very foolish at the same time. But just don’t bet against a big one soon.
Posted by Demetrius at 17:18