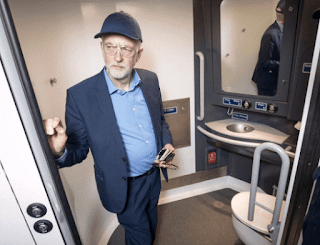 The keen eyed click people among you have seen the picture above on the web so I will skip the jokes about Mr. Corbyn's trip to Doncaster. Assuming that he shunned the delights of the A1 road, the sweet smell of nitrous oxide that he was so happy to use to avoid global warming and the groups of kindred travel peoples in the lay byes and service stations, he might have risked all in going by train.

Yes, there is life for Londoners beyond Potter's Bar. I hope that on passing through Hatfield he might have stood out of respect to the Gascoyne-Cecil family who have shaped so much of our History. It was Lord Salisbury in 1896 who brought in pensions for teachers, which helps so many of his Labour workers.

Also in 1899, he provided for education for the handicapped, shunned by the eugenicists of the Left and Liberal of the time. Not least, his nephew, Lord Balfour in 1902 brought in the Education Act for secondary education, a cause that Lord Salisbury promoted. Mr. Corbyn is a direct beneficiary of that Act, albeit a little later.

At Huntingdon he would have been up again. It might be as it is the birthplace of Oliver Cromwell and M.P. for that town. On the other hand King Charles I used the George Hotel as an HQ. Then there might be allowing a respect for another former London local councillor MP for the town, who made it to be Prime Minister, John Major, a hard act for Mr. Corbyn to follow.

At Peterborough, as well as the London Road football stadium he should reflect on the Cathedral with the mortal remains of Queen Catherine of Aragon, who kept her head but not her marriage as the first wife of King Henry VIII. Unable to deliver the heir (or policies) required she was shunted off to a quiet life in the country.

Then on to Grantham, passing Burghley, those Cecil's again, where he might detrain for a moment to bow his head to the memory of Alderman Alfred and Beatrice Roberts whose gift to the nation (Margaret, later Thatcher), prevented the UK from becoming communist under the heel of Cromwellian gentry such as the Foot's and Benn's in time for the collapse of communism.

Newark passes in a flash so no time for the toilet and was a town of many sieges during the Civil War so he might take his pick as to who to choose. Then it is time to gather the wits as well as the luggage that still remains in his possession, especially if it is an Edinburgh bound train.

Doncaster was a major industrial town, now less so, but has retained part of the tradition of railway works. Its' first were those of the Great Northern Railway, after 1923 LNER, and one the locomotives built there was the "Flying Scotsman". This is a loco' known to many of us through TV and media, for most it is the steam age.

But not all is as it seems. In 1949, I was one of a party that visited the loco' works, when it was thought sensible that we should learn about the basics of the economy. In general ordinary servicing and minor repairs were done in local loco' sheds but major overhauls and repairs at the specialist works.

The bosses were as much concerned with throughput as those of today, the system could not do with too many loco's out of service, the timetables were hard enough to keep as it was. So at Doncaster when a loco' came in it was stripped down and dismantled.

But the loco' that emerged was made up of parts from stores and prepared major items. By the late 1940's the "Flying Scotsman" was wearing out and downgraded from the then LNER mail line to the secondary Great Central line and based at Leicester Great Central. Around 1950/51 it went to Doncaster for major overhaul.

Some basic framework was retained but the boiler and other major parts were taken from stock. Either unused or in most cases items which had been repaired etc. from other earlier dismantled loco's. So the loco' you see now is not the 1923 version nor a good deal of the 1950's version.

Mr. Corbyn might reflect that there is a lesson to be learned here. Meanwhile Doncaster works is now about carriages, seats and toilets.