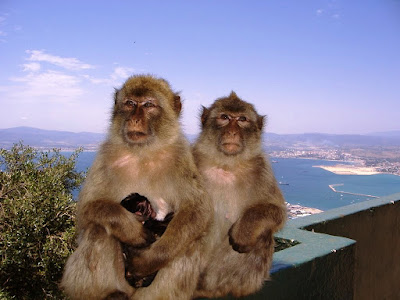 Long ago when compelled to serve in the Army, there came the time where the concern was where in the world would one be posted to. A bad one would be the distant islands where nuclear bombs were being tested. Worse would be to stay in Aldershot.

For various reasons, this being the age of the imminent threat of the Soviet Union and the retreat from Empire, the list of bad postings was a great deal longer than that of the good. One of the few on the "good" list was The Rock of Gibraltar.

It was warm, but not tropical. It had good communications with the UK, so was much like home. The local population were not opposed to the UK presence, in fact welcomed it. It was small enough to know your way around easily. But beware of the apes.

The problem was that this choice spot was only for very few and they were likely to be regular signed on soldiers. Some national service types did make it there and for them it was almost a holiday posting as compared with almost any of the others. British Honduras was reckoned to be quite good but a long way off.

The trouble was the people across the border in Spain, who were held in low regard. Now we know that during that period the Franco regime did not dispose them to be of a generous or welcoming nature. They were best avoided and at all costs. If you strayed across the border it could be a long time before you came back.

In recent decades, following the fashion of democracy, the citizens of The Rock have been given a choice. To the astonishment of everyone except those who knew The Rock, they have opted to retain the wayward old British link and avoid the regulation of Spain.

If the people of Gibraltar want to stay British, then we should allow them. But to be fair the apes could opt to be citizens of the new EU, perhaps with their cousins who moved to the Blair Drummond Safari Park in Scotland.