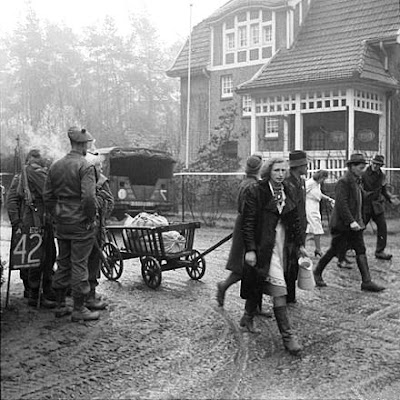 Long ago on the banks of the Elbe when Winston Churchill was still Prime Minister but Stalin had gone to the Great Committee down below, I recall looking at the Red Army. It is doubtful whether their detachments a few yards away liked to see us. Not that they were a lot of use in their main job. That was to stop the refugees getting across the water to a new and better life in the West.

It was not a good beginning for them, typically being put on the back of a smelly three ton lorry to go to a camp already short of space and where the food was basic. First the wheat had to be sorted from the chaff, that is the potential spies and trouble makers packed off back across the bridge to the East.

The process was rudimentary and it is likely that some of those sent back should not have been. Women who were with child and children were not included. Quite how many families were parted wrongly we shall never know.

By this time the refugee problem was long standing, several years after WW2 had ended with its mass movements of populations, some forced and some voluntary. The 1951 Census for the UK gives 165,000 Poles alone, many ex-servicemen unwelcome in their home country under Communism.

As a youngster I had known a few, some refugees after the War and during the War members of the Polish Airborne Division. But the Poles in the UK were one thing, those in Germany were another. As ever, there were no right answers and many decisions had to be made on the hoof.

I was once on the local park where well meaning people had organised a football match between our local Poles and Irish in the name of community. The Poles being short of one, I volunteered. It became very physical. Afterwards, the Irish went to the public bar and the Poles to the Saloon. It was diversity, but not as we know it.

The borders today seem to have shifted towards The East but we are rehearsing all the old disputes, not least those in The Balkans and The Middle East and Africa. When Blair was Prime Minister apparently the Foreign Office archives were dumped. I assume much the same has been happening in other countries.

Destroying the past may be convenient to those ruling at the present but there is a heavy price to pay and serious risks that we are about to pay them. It may account for some of the relentless stupidity being exhibited among the major powers in the present series of crises.

The USA and Russia should now be establishing common ground to keep the problems in the Middle East from escalating and spreading. The EU's ambition to recreate the Habsburg Austro-Hungarian Empire should be stopped.

The basic lessons of meddle meaning muddle meaning conflicts and mass migration have to be relearned by all those allowing their military and corporate interests to dictate actions based on the shortest of term thinking.

The UK politicians in all this may make a lot of noise but they are not of much use. They are rather like the children being loaded on the back of a lorry with an unknown future and lost parents.