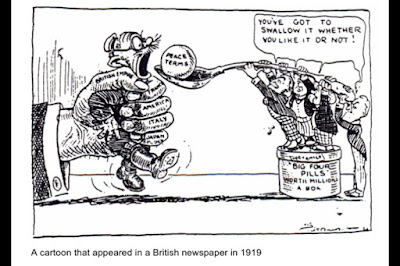 Consider, the great majority of the people of England have never had a Parliament of England.

The meetings of the 13th Century that gave rise to one in England were for the Peers and a Commons who were the Knights of the Shires and the Burgesses of the then major boroughs elected by small numbers of their own standing. This system lasted with minor changes etc. until the 19th Century.

By the time the franchise was extended to the lower orders in the late 19th and early 20th Centuries and Parliament reformed, it had become the Parliament of the United Kingdom. It had men, later women from across the Atlantic Isles. In our present arrangements while there is devolution to Wales, Northern Ireland and Scotland, there is none for England.

For the UK, the First World War with all its consequences, notably The Treaty Of Versailles of 1919, meant that it had many formal obligations and duties to other states that affected both the powers it had and how far it might act alone. This was alongside The British Empire developing in many places to a condition of interplay of interests rather than absolute rule.

After World War Two and a new tranche of world bodies, treaties and mutual aid systems and with some close integration, together with the financial effects, the UK was beholden to many others. The end of Empire complicated this and left many uncertainties. These led to joining the EEC, later the EU.

In the House of Commons, most seats are from England and in the House of Lords most peers have some sort of English origin, but this does not mean they speak for England. They speak for their party and to a great extent the lobbyists, corporations and bodies who pay best. This is one of the fruits of globalisation. Whether it is sweet or sour is open to debate.

When the Scottish National Party claim "independence" from London, sadly they cannot have it. Because it is not for London to give. All London can give is some residual powers and bits and pieces of authority that are not conditioned by other obligations.

Anything else must be conceded and agreed by the relevant world and other bodies with which the UK has been engaged for some time. But their removal, along with the Scottish MP's, could allow more say for purely English interests, in particular those counties and cities which have been the losers in competing with Scotland for money and assistance.

I suspect that in England there are ordinary people, especially in the more diverse communities that are now the norm in many parts, who will be glad to see the Scots go.