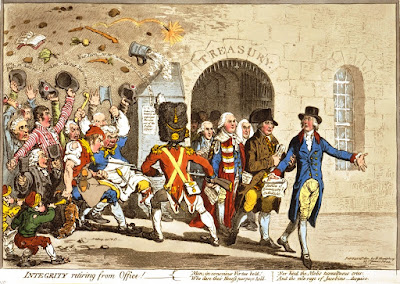 It is Wednesday, 14th June and the Prime Minister, the Rt. Hon. Jeremy Corbyn looks round the Cabinet table at the members of his coalition government. He has done the difficult bit, accepting the job from an elderly lady who has no place in his plans for the future, but HM was as courteous as ever, even offering him corgi pups to cheer up Downing Street.

He did not expect this. Quite why Rupert Murdoch had decided to offer free Sky Sports and adult channels to the under 30's if JC won may never be known. Perhaps the decision by Russia to allow SkyTV may have had some bearing on it. The gods of the media move in mysterious ways.

Some compromises had been necessary, notably those that allowed the SNP to claim full independence, which he had announced over the weekend, yet retain places at Westminster and in the Cabinet, purely for advisory and co-ordination purposes.

JC had granted them the pound as a currency and control over interest rates and bond issues, related to the promise to meet any budget deficits they might have. Defence matters had been agreed with Russia and even now their naval vessels were being cheered as they entered the River Forth.

The Lib Dem's had been reluctant to join the coalition and still were coming to terms with the fact they had any MP's at all. But the absence of any coherent policies gave them a freedom of purpose to take the jobs they were offered to supplement their incomes. They were happy to agree.

Although Sinn Fein were numerically small, they did have a role to play and had suggested, if only privately, that if certain concessions were made to The Republic, if only financial, then added persons from the South and Republic might join the Cabinet, again to assist co-ordination. Whether the Roman Catholic Church, however, would welcome Orthodox Missionaries from Russia was still an open question.

Elsewhere, the Conservatives were arguing bitterly about why they lost. Some said the lack of celebrities and weepie human interest stories in their campaign was the cause. Others felt that promising President Trump as many golf courses as he liked was an error. But Theresa May's coming out as an Arsenal supporter was perhaps the clincher.

One could forgive her many things, but that was too much.