Picturing Past And Present 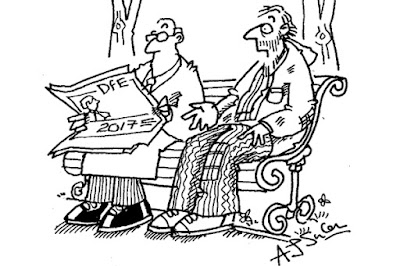 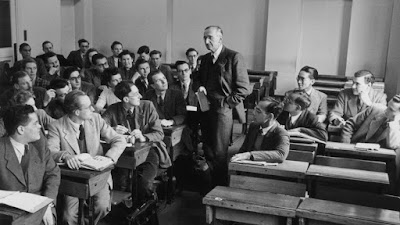 The connection between the two pictures above will not be obvious. The 2017 cartoon has the text as "I was the first in my family to get into student debt". The picture is from 1948 of Friedrich Hayek, Professor of Economics at the LSE giving a lecture to undergraduate students.

If this near all male group looks older than modern students this is because many will have done time in the armed services first and some will have worked for a year or two to save, most grants then being as the discretion of local authorities and this was an age of austerity.

The 2017 cartoon reminds us that very many students face high levels of debt. It is said that some will never be able to repay them. Then there are the debts entailed in buying or even renting property now commonplace. To add to these burdens the latest are the debts arising from car ownership for essential travel.

Behind all these lies the hand of government. Firstly making university education almost obligatory and offering loan facilities to allow this to happen. For property centrally controlled rates of interest, held down for political reasons has triggered the boom in property prices. For car ownership, lax regulation and low rates of interest again have added to this.

Hayek would have had none of this. A man for free markets as opposed to nominally free but "guided" or "supported", and any kind of central control, such as tariffs or restrictions, in the world of the late 1940's Britain he was out of place. His views were held to be those of the past and economic history not reality.

So in 1950 he went off to Chicago to join a very different school of economics and it would be thirty years before grudging governments found it necessary to relax their grip. What we do not realise is that the grip was still there, only moderated and as ever with government ruled by short term thinking and the next poll predictions.

The students in the 1948 picture would have been looking to work eventually in particular areas. Only a few might become academics. The cost of post graduate study was high and at that time jobs in universities or colleges limited. Some might teach but most I think would be looking to work in government, central and local and for a few trainee management jobs in either select corporations or more so the new headquarters of nationalised industries.

For all Hayek's work he was not talking to the converted, he was talking to students who could not be converted as their futures lay in a society and polity that was centrally controlled, planned and administered. His economics, as I have said was of the past and in Britain there was then no possible future for it.

Half a dozen years after he left the economics staff etc. were mostly Keynesians of one sort or other, none pure or who Keynes would have recognised, with some Marxists and a handful of Welfare Economists, now lost and forgotten. Also there was a group of the wild men of mathematical economics and the surreal world of Games Theory.

Which brings us to the present day and the trillions of debt owed not just by governments or banks, but the couple next door, their student children and the cars in the garage and on the drive.

I told you so?