Unofficial Report On Events At Orgreave 1984 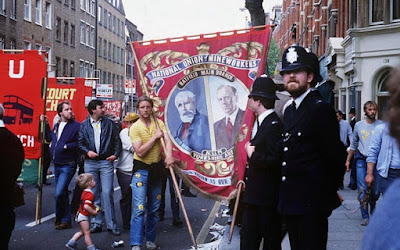 This report is necessary because a number of politicians and others could not be bothered to research it themselves, were not able to use the internet and were not sure of who to ask among the very many people who were around at the time. As usual they want an expensive inquiry composed of people who know little or nothing about it.

In June 1984 three months after the start of the Miner's Strike, of which little warning was given apart from Mr. Scargill and friends with megaphones and speeches at hundreds of meetings as well as extensive press and media coverage, it was not going well. The miner's leaders, while disagreeing about most things managed to conclude that summat must be done.

As over a decade before another Miner's Strike in the early 70's was recalled it seemed a good idea to do more or less the same sort of thing that was tried then and which had success. This was to prevent supplies of coal from the vast numbers of tips and from mines where the miners did not want to strike from getting to power stations and related plants.

All you had to do was go to them with gangs of hard men, beat up who was doing it and ensure their families were threatened and assaulted and if necessary burned out of their homes. This would stop the supply of energy and defeat the government. Not just that but the government elected only a few months before with a large majority would be overthrown and replaced. A new government of trade union leaders assisted by Moscow would join the Eastern Block and live happily ever after with East Germany as its guiding hand.

The Prime Minister was Mrs. Margaret Thatcher, a war monger who  in 1982 had attacked an innocent socialist Dictator of Argentina who only wanted to bring Spanish cuisine to the Falklands Islands, then being fed on British fish and chips. She had gathered round her a number of militarists bent not only on disagreeing with socialist dictators who needed to give their troops experience but unfairly who had actually some experience of fighting in war.

These were Denis, her husband, William Whitelaw who had been given an Military Cross showing that he was an arch aggressor as had Peter Carrington. Others were Keith Joseph and Nicholas Ridley.  Much worse was that they had the audacity to think and plan ahead displaying an anti-democratic intent to keep energy supplies going for the economy and ordinary homes.

The Nation Union of Mineworkers innocent of the need to think, plan, and organise logistics were at the mercy of a group in power who used these vile things to the full. We have not found the secret agents deployed to Barnsley to spy but with only around a hundred thousand people locally who were aware of the NUM's intentions it was a well kept secret that required the high skills of reading newspapers and listening to the news on radio or other people.

It would have taken long and careful training to ensure spies knew how to wear a flat cap, knot an old and dirty scarf and be able to stand up and drink beer in straight pint classes in secret venues called public houses with public bars or working men's clubs. They had to know how to treat a whippet and discuss the local sport of soccer as well as being able to use a 'bus.

The local police, South Yorkshire, were under a police committee chaired by a Barnsley Labour teacher together with members who were miners. He was also a governor of Barnsley Tech', its biggest department being Mining, across the street from the Yorkshire NUM head office, Scargill Palace as it came to be known. Also, within yards, was Barnsley Town Hall where the gregarious councillors, governors and NUM senior officials used to gather to discuss the quality of the municipal whisky.

For how it all started refer to "Mining The Past" from October 2014 in this blog. Historically, the thesis that the cock-up theory of history applies may be difficult to accept given all the potential for various wider ones of political philosophy but given the history of the strike, for those around there at the time philosophy came a poor second to sheer daftness.

Given that the South Yorkshire Police had a lot of officers who were of mining families, a great many living in local areas where they were vulnerable and had as its governors a Committee largely composed of people representing mining communities, it was likely that the NUM would get its way in closing down many power stations and other plant.

As in other emergencies the government used its powers to bring in police that would defend the plants. Of course in retrospect this could be seen as wrong, other trade union leaders at the time were adamant that it was.

The consequence was that police trained and able to deal with riots and violence came in. It was difficult, when Scargill's men were trampling about and desecrating the graves in Handsworth Cemetery adjacent to Orgreave, some being of miners who died in accidents, many thought that this was quite acceptable and it was wrong for the police to chase them away.

The trouble was that Scargill was going by the Lenin play book but the mounted police were not. Those of us familiar with cavalry and its history and for that matter other riots in other places would argue that the relatively limited number of flying pickets hit, mostly only poor mature or other students was small. Given that there was ample scope for retreat that they insisted on standing in the way of a galloping horse was not entirely sensible.

Today's critics will feel strongly that the pickets and NUM recruited demonstrators should have been allowed to cripple and injure those they pleased, whether they were ordinary workers wanting to work or miners who did not want to strike. Then there the others, miners who eyed the redundancy terms and wanted to be eligible.

For which side you are on take your pick.

There you are, will this do? And it's for free.