Who Do You Think You Were? 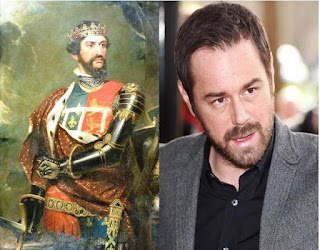 There are times when watching the TV when I sigh a deep sigh. Often it is to mutter, why do they not go into the detail of demographic statistics, variability and analysis? Possibly, because they have a storyline to tell that they want people to watch.

The papers have covered the story of the first episode of the latest run of "Who Do You Think You Are?" on BBC1. It dealt with Danny Dyer, the actor prominent in the series "East Enders" who is an East Ender playing an alpha ultra East Ender who turns out to have Royal ancestry.

It began with the personal story emphasising his working class London background. The first part went back several generations in London and was said to have a hint of French ancestry, aha, the Huguenots and religious persecution and migration, but that was not chosen.

There was a marriage to an ordinary lady of East Anglian ancestry, who was the "gateway". A few generations earlier in the 17th Century her forebear had been a Royalist landowner busted by the Puritans. Further back there was a marriage, another marriage and then a Seymour, the same ones that King Henry VIII married into.

Then before there was Lionel of Antwerp, a younger son of King Edward III and away you go. Who would have thought it, how could it have been possible, how unique is Danny? The answer to that is that he is far from unique. Out there is a huge number of people, who are among his distant cousins.

Good for Danny and his family, he was lucky enough to have a team of experts and historians do the job for him. It made up for the sad case of a convicted lady who had suffered serious poverty.

But I bet I have more convicts that he has.