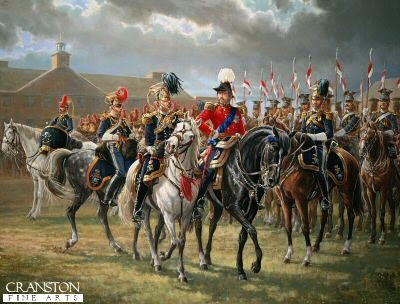 The debate about The Charge of the Light Brigade of 25 October 1854 during The Crimean War went on for over a century as academics, military men and others argued about who to blame, Lord Raglan, the Commander, General Airey, Lord Lucan, Lord Cardigan who commanded The Light Brigade, or Captain Nolan, the messenger. There was a 1960's film, studded with stars and very costly, that gave a poplar version, if free with the facts.

Had the shell piece that struck down Captain Nolan felled the Earl of Cardigan all this may not have happened. It is possible that the retreat may have been sounded but if the debacle did occur, one to add to a long list, then a deceased Earl of Cardigan no doubt would have borne the blame alone.

It is an accident that I have had a look at this again. Trawling Census Returns of 1851 for Piccadilly for one thing, another caught my eye. It was a Mrs. Somerset who gave her occupation as "Idleness". Entries of this kind are unusual, especially among the aristocracy. But her husband, perhaps long suffering, was Poulett Somerset a Captain in The Coldstream Guards.

A few clicks later it was clear he was a grandson of a Duke of Beaufort, more to the point, he was a nephew of Lord Raglan, a son of that Duke and was with Raglan as one of his Aide's De Camp during the Crimean War. His wife was Barbara Augusta Mytton, daughter of John Mytton of Shropshire; Mad Jack Mytton himself, the noted hunter, horseman, rake and spendthrift bankrupt of The Regency Age.

This is a rich mixture but the question in my mind is that when Raglan and Airey sent their message to Lucan and Cardigan why did they not send Somerset, then a Colonel, a man with the rank and the personal clout to deal with them rather than a junior officer and of a lower order who they despised as a "professional"? Nolan was a famous horseman but Somerset was also in the highest class.

Having been with Generals when they were in discussion with staff officers when in the field on war games I know what was in writing, but this was only a part of what went on discussion of the options and issues. This applies to much of life as we know it. What we do not know and cannot be certain about is who said what to whom and to what effect?

So we cannot be certain that when Russians were seen taking guns whether Somerset was in favour of "doing something" and sending Nolan or doing nothing, in that sending cavalry chasing off after a few lost guns when a major battle might have been impending was unwise. As a huntsman he would have known that when the chase is up once gone they are impossible to recall. Also, perhaps Raglan needed him by his side.

Later, in a period when The Times newspaper was the gutter press of its day it was prone to attacking people on the basis of tip offs from anyone with a pencil and access to paper. One of their regulars called himself "Medidjee" and he had a swipe at Somerset in 1858 but short on facts.

Below is a response in The Morning Post of 10 March 1858 signed "A Civilian" which apparently the Editor felt had to included on the front page. This suggests it came from a very high placed source. This is a jpeg item which can he increased in size.

Men of the time had strong opinions which are strange to us and seem to defy explanation. We should accept that what was logical and sensible to them may be difficult to understand now and with hindsight we know to be wrong but that is the way of the world. Somerset had clear ideas about what was best in cavalry training.

It was fox hunting as this piece from the Leicester Journal of 27 February 1863 tells us on the occasion when he was dined out of his spell in Gibraltar by the officers, again jpeg. 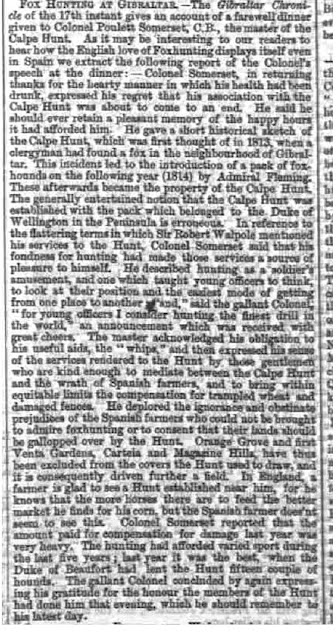 Also, a leading author at the time George Whyte-Melville had been in The Coldstream's with Somerset between 1846 and 1849. He was an avid hunting man and died in the field when he fell off his horse and broke his neck.

To return to The Charge, one thing that impressed it on the mind and opinions of the public was the emotive poem by Alfred, Lord Tennyson, the poet of the day written and published very soon after the news broke in Britain.

He lived on the Isle of Wight which might have seemed remote at that time but where Osborne House was, the much loved country home of Queen Victoria and Prince Albert.

Also, just along the road at Arreton on the Island was the aunt of one of the prominent ladies of the court, one of a family with strong cavalry and military connections and a sister of this aunt was personally connected to Colonel Charles Grey, Private Secretary to Prince Albert.

There is more to the row over where the blame might really lie for The Charge of The Light Brigade than we know or ever can know. What we do know is that during the 19th Century as well as heroic victories and great achievements there were a good many debacles and disasters.

And we need to learn from both.