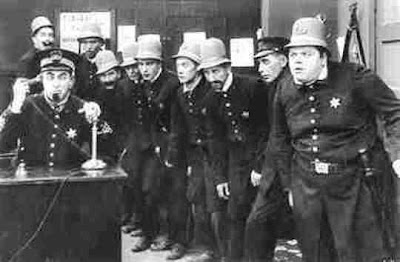 There have been stories in the press and the blogs about the relationship of police officers to their bog (toilet - loo) rolls. An item in Kent Online by Jenni Horne tells its own tale.

“Officers at Medway Police station have been caught short after being banned from replacing a roll of toilet paper. Staff at Gillingham’s ‘super nick’ must call a contractor out to replace loo rolls and light bulbs rather than doing it themselves. Police are being bound up in red tape because the station in Purser Way, along with the new station in North Kent, was paid for by a private finance initiative (PFI).

Ian Pointon, chairman of the Kent Police Federation, said: “Because of the way they have been funded you have to go through the contractor to get anything done. “In the old days if a light bulb broke, you could just go the cupboard to get a new one and change it, but now you have to phone or email the contractor and they have to send someone to do it.

“If you run out of toilet roll, you can’t just go and get another one, or if you want to put a white board up you have to go through the contractor to decide where it is going to go. Police officers find it very frustrating.” Assistant Chief Constable Gary Beautridge said: “By using a contractor to undertake the routine service work we free up staff to concentrate on the matters that concern the public - continuing to reduce the level of crime across the county.””

There is a blissful bureaucratic barminess in Beautridge’s statement that has a beauty of its own. Personally, when I change the bog roll, it does not entail any extra duties as I am enthroned at the time and spares are kept to hand. If I change a light bulb, about five minutes is par, so long as some are close. Quite how long it would take me to boot up, log in, complete the order, and how long it would take the service contractor to notify the attendant, and how long it would take that person to do the job do not rate as “costs” or “lost time” in the never never land of public sector management, notably those whose buildings are funded by Private Finance Initiative schemes (PFI).

Once finance borrowed by the government, local or health authorities etc. was regarded as public sector debt, and the whole was managed within existing structures as part of the job by far fewer people working locally to central government supervision of the total budget commitment and implications. Today PFI is “off balance sheet”, with Enron style accounting, and does not form part of the admitted government debt.

Begun by Major’s Conservatives as an occasional device for a few marginal projects that did not fit into any pattern, Brown and Blair turned it into a major source of finance for capital projects for all services at the urging of their advisers drawn from The City. This entailed substantial added management costs far beyond the old systems, all of which added to the debt, interest and liabilities. The City of London, the Big Four accountancy firms, and the armies of consultants have been on a bonanza of profits.

Profit is a vital element in engaging in business and its functions are critical. But only if it is the profit of doing the job well and arises from real work and real investment. PFI is not this; it is in the business of taking the profits of financial extraction, whereby the take or “rent” is maximized from a position of monopoly regardless of what happens to the sources of the income stream.

There have been many consequences of this as it has impacted on public services. We have had closures of maternity wards at a time of rising births, closure of urology services with an ageing population, and the closure of A&E units close to major motorway junctions. All these occur to pay off the cost of that new building or those new offices for management and accounting.

In the media we have the personal interest stories, the dead babies, the birthings in car parks and corridors, the bug infested wards, the blood spattered lavatories, the geriatrics and disabled dying of starvation or dehydration on hospital wards, the disasters and operations going badly wrong. In policing it means all those officers who are rarely available and less effective when they are. Very often financial problems arising from PFI contracts are behind the stories, but that is too complicated for the media to explain.

Much the same issues apply to schools and other services. It is interesting that the “ring fenced” services which will not face cuts (in theory) are the same ones in which vast debts have been built up on PFI contracts that have impacted radically on their work and function. All these services are supposed to be for the benefit of ordinary people and amongst the essential reasons why we pay all that tax. When Darling made his PBR speech about dealing with government debt he did not include the amount, levels, or impact of PFI.

But the “little people”, the ordinary taxpayers and those in the poorer groups are regarded as the “untermentschen” of The Labour Tyranny. The surrender of authority and control to unrepresentative and almost unregulated interests by the government has certainly profited them and their friends in the “rents” they have extracted and will continue to do so for decades to come as a result. These will mean a debacle for the ordinary people when the forthcoming cuts take place.

If anyone had thought that within just over a decade when you visited a public service building it would not be owned by the service or an authority whose rulers you could vote in or out. Also that many staff would be agency employed, and its running in the hands of a group of contractors and financiers, none of whom were publicly accountable, and controlling the finest detail to ensure profit, as well as creaming huge sums from the taxes you paid as fees, charges, and interest. You would have thought that the world had gone completely crazy.

Just like your local coppers think when they queue for the only functioning toilet hoping against hope that the bog roll does not run out and they will not have to use the forms they are given to complete the endless paperwork.
Posted by Demetrius at 17:40