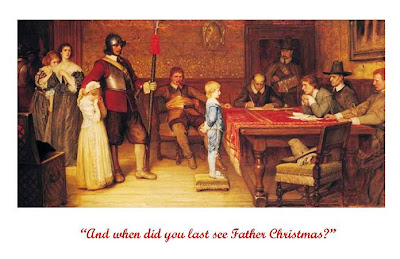 The name Ebenezer has attracted interest arising from the season of the year and the endless screenings of versions of “A Christmas Carol”, Charles Dickens take on Christmas published in 1843. Ebenezer Scrooge is the name of the miser who is persuaded by spirits to abandon capital accumulation in favour of consumption spending on behalf of those unable to take on the burden of economic stimulus.

There have been spoof blogs and articles favouring Ebenezer Scrooge’s original policy of conservative financing and leaving the Cratchits to their own devices, but point is given to the matter by the knowledge that Gordon Brown’s father was named John Ebenezer Brown.

Why Dickens happened on the name Ebenezer Scrooge (Scrogg/Scroggie?) is still a matter of debate. Given that he was something of a jackdaw in picking up the names and references that appear in his books it could have been anything from a tale he heard told to an incidental experience.

There were many Scots in London at the time of Dickens, himself once a clerk. They were recruited for their skills as clerks and accounting staff in the mid 19th Century arising from the more organised and extensive education of the young in Scotland at the time. Inevitably there was some resentment when many office jobs went to these migrants.

Dickens may have had to deal with a few and if he came up against one or two who were more stringent and particular in their duties than Dickens cared for and one was an Ebenezer the name was too good to miss.

What of the name John Ebenezer Brown? With 171 Ebenezer Brown’s listed in Scotland at one time or another and no doubt others there is no shortage of choice. The one that really catches the eye is the marriage of an Ebenezer Brown to a Sophia Blair in the Middle or New Parish of Greenock, Renfrewshire in November 1875.

In Greenock at the time was a David Brown who had a son, Ebenezer in 1886, and earlier a John Brown, who also had a son Ebenezer, in 1863. There were a lot of them about. At this point I have to declare interest. One of my grandparents came down from Greenock and their family were resident in the same parish and the same period as those Brown’s. One had the Christian name of Ebenezer which had been in the family at least since the early 18th Century.

They had moved up to Greenock from Ayr and they and their family connections around the Shire had been there at the time of Robert Burns, whose maternal family were Brown’s. As we know, Gordon can be a wee, sleeket, cowran, tim’rous beastie, and the Burn’s poem “To A Mouse” ends:

“The present only toucheth thee: But Och! I backward cast my e'e, On prospects drear! An' forward, tho' I canna see, I guess an' fear!”

As well as the alarming thought that Blair and Brown could be related is another twist in the tale. The parts of Ayrshire and adjacent districts were strongly Presbyterian, but of different persuasions.

One group in the late 17th Century whose firm beliefs made them Protestant Martyrs were The Cameronians, a devout fundamentalist Biblical group, the followers of Richard Cameron who challenged authority to worship in their Conventicles.

A hundred or two years later many people in that general area of Scotland and wider would have part of their ancestry derived from this relatively small group. There are a great many possibilities. One is that in ancestral terms Brown could be in part a Cameronian by faith and blood.

Happy Hogmanay to you all.