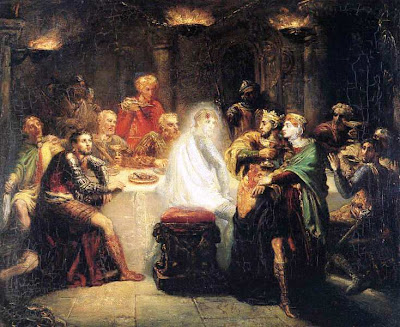 In any respectable Scottish (or Danish) tragedy involving witches brews of forecasts, declarations, and intentions, ‘orrible deaths and the rest there always has to be a ghost. I saw a man who wasn’t there etc. For those raised in the rectory, vicarage, or manse, the equivalent would be writing on the wall, mene mene tekel upharsin, the days are numbered, another feast, another bust ruler, in that case Belshazzar.

So who and what has been missing this week? Lord Peter has been away, I assume on mystery trips delivering Milk Tray. Harriet Harman has been waiting for the light to dim before emerging to propose the deflowering of the virgins. Johnson has been off helping with the Christmas post, and Straw has been the needle in the haystack.

Amongst the other missing matters has been a deathly hush about currencies. The Euro issue is out there somewhere, nobody knows where, but will come rushing in with the power of Grendel. Beowulf, sadly, is subject to health and safety, and will not be available. In any case the Anglo-Saxon model is going out of fashion. What might happen with further decline of the dollar and the possible unshackling of the pricing of oil from this base is another matter under “Any Other Business”. There are other potential variables in currency markets which are being ignored.

According to “Private Eye” Blair has been in Azerbaijan opening a new factory for formaldehyde production. Just what we all need, embalming on the cheap. But they paid in hard cash, and don’t we all need it. In relation to Blair, there are some huge items on the Defence budget that need attention, no reference to these in the light of recent casualties, and he will not be paying much tax to help us. The NHS computer business was mentioned, but not the huge increase in future demands that are now well over the horizon, or the fact that the scale of the losses has cost us major losses of service.

We are told that there will be a lot of freezing this and that, but some of us recall the last time a raft of measures of this kind occurred, the winter of discontent of 1978-1979. This may not happen because too many people are too vulnerable. What could happen is increasing chaos as the mismatch between management and service worsens. Energy policy is still in the witch’s cauldron. The other thing not mentioned is what happens to all these freezes if a bout of even moderate inflation occurs. As it might if interest rates move up, a prospect some of think could easily happen.

Look for other ghosts, there are plenty around, but this government, true to form, has no idea where the bodies are buried.
Posted by Demetrius at 18:10