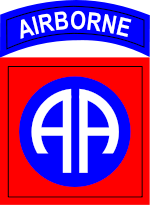 Checked out the Michael Yon web site this morning. If there is any doubt how many Americans and others regard the war in Afghanistan it is sobering to see what their current stance is relating to what should be done.

What has caused me to make sure I do not forget the UK, the US and others are engaged in this Christmas and into the coming year is the news, unmentioned in the UK media that the US is putting in the 82nd Airborne Division.

Anyone who has seen a screening of the film “The Longest Day” about the Normandy landings of June 1944 will recall the figure of an American parachutist who came down on the church in the village, was caught on hung from the spire whilst the action raged below him. I believe he was one of the 82nd who were dropped not long after midnight to attempt to secure the interior behind Omaha Beach.

By this stage of the war my family had moved from their city of my birth because of my father’s work. There were a few Air Force Americans at first straying in from air bases not too far away, but suddenly there were American troops in large numbers right on our doorsteps. At the turn of May and June 1944 most of them left leaving very few on their camps.

Youngsters soon forget, and they form just a vague memory of that time. It was only a handful of years ago, trawling web sites for some military history that I realised that the troops I had known all those years ago were the 82nd. The reason for their leaving was to go to Folkingham and North Witham in Lincolnshire to be flown to Normandy.

They seemed to be a great bunch of guys, open, polite, and bringing the film depictions of Americans to real life. A particular memory is of having to wait at the barbers for a hair cut, while a couple of Americans ahead of me were dealt with. When they were finished one took a long look at me and asked me if they had made me late for school.

I admitted it, but did suggest that on the whole I preferred reading comics in the barbers to doing arithmetic. But they handed over Hershey bars and gum in apology. On another occasion, the town Victory Parade, I was stuck at the back and could not see, so was allowed to stand on the Jeep bonnet to be given a clear view.

They were popular around town and were well thought of. In the music hall if a comic made jokes about Yanks that might have drawn laughs elsewhere they flopped badly with the local audience, many of whom would have known what the men they considered their friends had accomplished in France.

I wish the 82nd Airborne well and the best of fortunes in the same way as I wish those for our own. They have the duty of clearing up a politically bad business, amongst the most difficult of military tasks.

But I will not be chewing gum; the teeth now are not quite up to it.
Posted by Demetrius at 16:42