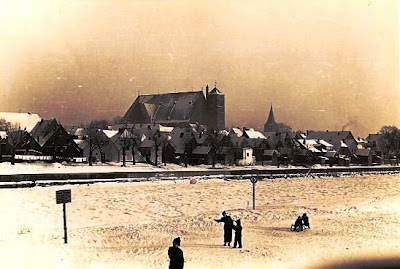 The ancient gods of the north, lurking in their caves and caverns until the next cataclysmic event sees off enough humans, then to emerge and be reinstated in their proper place, decided to have a laugh this week. With many of the political leaders and their sidekicks in Copenhagen tackling the issue of Global Warming, they slapped a winter blocking high over northern Europe delivering cold a plenty, frost, snow, and an unlimited supply of icicles. Been there, done that, the picture is of Northern Germany in December 1955 when a long blocking high froze all the rivers for weeks.

The irony has not been lost on many of the cartoonists who have welcomed the gift of satire to speed their efforts. What all of us should remember is that the path of either climate change or relatively localised weather pattern readjustments does not go in a straight line. There are many zigzags, loops, and deviations on the way. What I am grateful for is that these days when the weather turns nasty, I can just opt to stay in and watch it all on screen.

What never fails to strike me in our super organised wonderful technology and high communication level modern world is just how vulnerable we are and how stupid humans can be when the predictable occurs. One moderate snowfall overnight reduced our local transport systems to chaos and the roads were not helped by large numbers of drivers attempting drive along roads that were going to be difficult.

There have been the usual complaints about the gritters, but they can only do so many at a time and have a scale of priorities. It is not difficult to work it out. In any case too many of the roads they were trying to grit were blocked by vehicles that should never have been out. In addition the urge to concentrate vehicle depots and set use according to theory adds to the problems. A road engineer once explained to be the intricacy of temperature and road conditions that could affect the issue and the more problems in getting it right if larger areas had to be covered.

As for the trains, if we are running services now on a basis of high intensity use of train sets and staff, it does not take many hiccups to have a chaotic situation. Add to that the lack of back-up for train breakdowns beyond one or two at a time, it is very likely that the service will go haywire. As the running is entirely dependent on “hubs” and concentrated management, there are few people on the ground along the way to deal with matters and make decisions.

South Eastern trains, as usual, let most of their ordinary services go hang, but this time concentrated their efforts on the new High Speed Train high fare service, ticking all the right Ministry of Transport boxes. It helped them when the Eurotunnel was blocked by trains on which too much condensation had occurred in changing from colder to warmer air as happens in tunnels. The HST had clear tracks.

As for the police, as one blogger from a force points out, their management procurement policy has given them for routine operations cars that are useless in bad weather and they now operate from “hubs” so the whole system depends on endless to and fro of men and cars which are not designed for severe weather conditions. So no cars, no police, and nobody to sort out situations on the roads.

The much bigger problem is our easy assumptions that everything will work all the time because we think it ought to because that is the way we have decided to live our lives. The other is the overburden of complex management with computers where for the sake of “efficiency” and meeting the financial and running figures which we would like to have provision and service is fine tuned, concentrated, and has to work to increasingly complicated structures and rules.

In the last three decades or so we have been persuaded that we can live in a way totally alien to that of previous human societies in the scale of movement and distances considered normal for large numbers. Moreover, we expect to function according to precise timetables and high intensity use of equipment and staff beyond anything thought possible ever before. When it goes wrong, almost always for reasons that are entirely feasible and predictable the hullaballoo is immense.

Worse, because we expect everything to work all the time we have systems and staffing to be kept at a minimum to keep the costs as low as possible. It all depends on very few things. Petrochemicals is one, co-operation, flexibility, and ability to make decisions are others and it is all delicately balanced. If the negotiations in Copenhagen are any guide we are already on the slide.

Perhaps the ancient gods know more than we do.