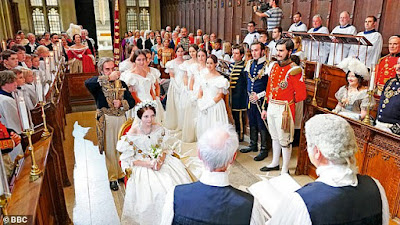 When it comes to history there is nothing better than the detail to what was what. It can change perspectives and allow a more critical view of what you might read in books and especially see on screen. As ever it always, well almost always turns out to be more complicated than you think or are supposed to think.

The ninety minute TV item fronted by Lucy Worsley on the wedding of Queen Victoria and Prince Albert leads us there. It was an engaging and interesting tale of what was involved, why and centred on the actual ceremony.

The implications were that it was not simple. The programme was more about the frocks and occasion than anything but expecting it to do much history would be wrong. It would need months of mega series to do that.

Who were the bridesmaids is an example and could be seen as a simple matter on screen but this link will give a longish and much fuller detail. Quite clearly who they were and what they became was a major matter, as were who were the guests at what in the ceremony.

To think about history. Prince Albert died in 1861 aged only 42 so how great a loss was he? He was certainly an active man in a number of worthy fields and had come to be respected if not entirely liked. Hard working and capable he had views on the world and what it should be. Which asks the what if questions.

In UK politics what might have been had he been granted another thirty or so years of life? One is that Victoria would not have fallen under the spell of Disraeli and he might have been able to ensure that Gladstone was better organised and less voluble. His interest in reform may have driven earlier action in education, local government, housing and health.

He was also a European of high standing and his death was at the beginning of the rise of Bismarck in Germany with all that followed. Could he have stopped or prevented the wars against Denmark and then France? Might Germany itself become a real federation and not a Prussian dominated Empire?

Imagine a France without the Third Republic. Could the Scramble for Africa been avoided? In another place could he have persuaded the Confederacy to abolish slavery?

Further afield there was the bungling in the Middle East that dragged Britain into invading Egypt by accident, there was China and in particular there was the Raj in India. It is possible that he might have had other ideas about the Empire that would have meant a very different kind of interest, intervention and rule.

We shall never know, we shall recall only a young man and girl getting married and having a large family.