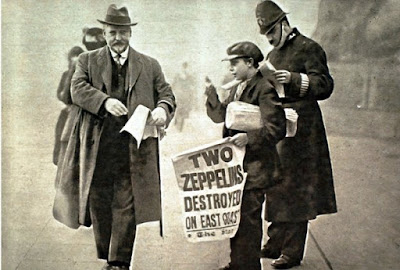 The media today has become a target for our dissatisfaction about the way things are and how they don’t work. We have forgotten that it is nothing new and historically is just another bunch who have London and its politics in their grip and under their influence.

It was Stanley Baldwin who used the wonderful line of Kipling’s, his cousin, about media control, “Power without responsibility, the prerogative of the harlot throughout the ages” in 1931. He was attacking the press barons, Lord Beaverbrook and Lord Rothermere and the extent of the influence they enjoyed.

The Harmsworth (Rothermere) family and their adjuncts are still around and have the Daily Mail, whose online success is owed to its free access and extensive celebrity sensation and other scare stories. Its print sales are helped by a series of promotions designed to appeal to the poorer end of Middle England.

The first Harmsworth, Alfred, from the 1890’s to the 1920’s was said to have a major influence on politicians and who finally went mad before he died relatively young. Whether this streak of megalomania is genetic or environmental is open to debate.

Max Aitken, later Lord Beaverbrook made a sudden decision to try his luck and money in England in 1910 after a scandal in Canada to do with cement and bought his way into influence very quickly. Spotting the main chance he took on the Express newspapers and developed them into a popular and strident sheet.

The Beaver became a Minister of the Crown in both World Wars and is credited with helping to deal with munitions crises. He was certainly close to Churchill who relied on him for good company, cigars and trenchant advice about the capabilities of other politicians. His judgement went badly wrong in the 1950’s with Eden whose health was not up to the job of succeeding Churchill.

The elections of 1945 were something of a blow to his reliability and this may be because they had not seen the Daily Mirror coming up on the rails. This paper had captured a good many of the working class and began to wield influence in its turn. By the 1960’s it was a force to be reckoned with.

At the helm was Cecil Harmsworth King (yes, his father married a Harmsworth) and it was him in 1968 who was alleged to have tried to organise a putsch in 1968 to rid the UK of Harold Wilson and a crew of Westminster politicians who lacked credibility with the people.

We can go back a long way with this. In the 17th Century there were the leading pamphlet writers most of whose identities are not known, many pieces form the Thomason Collection at the British Library. In the 18th Century there was already a formidable press with many contributors.

One in the Public Advertiser, under the name “Junius” (see Wikipedia) had special influence because he clearly had full access to those who held power. Current opinion suggests that he was Sir Philip Francis but I suspect that others were involved. Looking at the connections it may be that Jeremy Sneyd was a source.

By the middle of the 19th Century The Times had moved to centre stage and was known at “The Thunderer”, but it was still part of an extensive press that could move votes and therefore politicians. A high point was the Crimean War when The Times was right about the treatment of the troops.

In 1884-1885 the General Gordon fiasco in Egypt and The Sudan arose because a government with a lot on its plate allowed itself to be pushed into action by a lynch mob media against the better judgement of many of those responsible.

How many of the imperial ventures and how much of the effort involved could be attributed to a gung ho media urged on by City speculators and other interests in the name of glory and circulation is a good matter to debate.

This culminated in the summer of 1914 when The Times under Wickham Steed urged the Empire to make war against the German Empire along with other press support. This was at the height of the “Summer Season” with all its engagements. In London, the politicians bungled until war became the default option.

In retrospect had the dilettante Premier Asquith, along with Grey and perhaps even the King made a rapid journey to Berlin with full scale Foreign Office action designed to halt the mobilisation of the Armies of Europe might war might have been avoided?

But they did not and became involved in a war of incredible destruction of men, material and Empires.  By 1918 the world had changed, arguably much of it for the worse. But at least the newspaper circulation and advertising had held up.

The real question is just how much influence it has had in the military and financial ventures of recent years that have done so much damage.