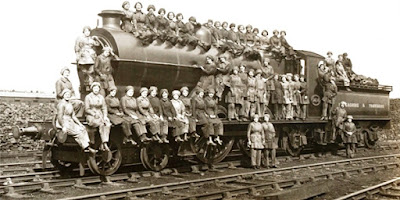 One feature of the modern age is that the depiction and ideas about females of the past are at variance with the females of seventy and more years ago. The picture above is a case in point.

It was taken late in 1915 during the First World War and shows that women had taken over the dirty and basic job of dealing with steam locomotives because the men had gone. If correct this was at the Bank Hall Locomotive Depot on the Lancashire and Yorkshire Railway Co. line into Liverpool Exchange.

The women may have included ones known to my family, perhaps as wider family, or as neighbours, friends and acquaintances. Women who they would meet when shopping or in any ordinary daily life. Thirty years later I may have met one or two.

They will have had little education, a handful of years in a class of 50 to 60 in an Elementary School. They may have been religious up to a point as people in general were obliged to be, without making much of it. Their horizons were limited as few will have traveled far. They will have done little reading and the literature and arts were for others.

Yet their class were the great majority. Which raises the question what were they really like? The other question is what happened to them, why have they all gone? It is because that world has gone as has the women. Also we have lost their men. Those working class communities no longer exist.

If the population has four or five generation groups then in the two youngest groups those communities, the work they did and the lives they led are lost to history but history has lost them because it is written by others with other political and philosophical agendas.

The older two generation groups will depend on any passing media characters of fiction. It is only the oldest group which will have any memory and this is tarnished by the decades of media etc. fiction and the contempt of the political and metropolitan classes.

The ones I recall were good and capable women with a strong sense of right and wrong and could be relied on and trusted. They worked hard to build a better life for their children and grandchildren. But today the youngest generations are taught to despise them.