Music And Musing For Advent 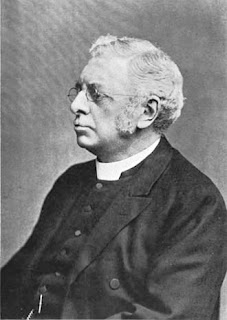 It is Advent and those who tune in to any of the services or the Nine Lessons and Carols in the Christmas period might hear a chorale by the Rev. John Troutbeck above 1832-1899, or an excerpt of the Bach "Magnificat" which he translated from the German.

He has a page on Wikipedia where the German operas translated are listed, Mozart with "Cosi fan tutte" and Wagner etc including "The Flying Dutchman".

He was a Canon Precenter at Westminster Abbey and a Chaplain in Ordinary to HM Queen Victoria. You might think that he was not the sort of person who would be chasing about The Lake District of Cumberland on a horse hunting foxes, perhaps in the company of Beatrix Potter, the authoress who gave us "Peter Rabbit".

The 19th Century was another time. He was one of the family of Troutbeck of Blencowe. In 1851 two of them were at Rugby School at the time of Thomas Arnold and the era of the book "Tom Brown's School Days" written by Thomas Hughes, doubtless playing hard at the football, as well as riding in  the school hunts around the neighbouring shires.

Matthew Arnold, his son, the poet, was contemporary with John Troutbeck. There were other literary connections and especially in The Lake District. In the earlier generation the poet and writer, William Wordsworth's sister, Dorothy was close friend with a Mrs. Troutbeck.

For the younger sons of the landed classes, the options typically were The Church, The Army, The Navy, The Law or the Civil Service. But there was another, important, but forgotten and misunderstood. There were the Land Agents, or Estate Agents, not the kind of today, salesmen for any sort of property. They were the men who ran many of the major estates of the aristocracy.

John's younger brother Robert became Land Agent to the Viscount Falmouth in Kent and in the time before local government reform was the major figure in the locality of Maidstone, County and Garrison town. He built a large family house there, long demolished and replaced by blocks of flats. Reveille and the Last Post were part of each day.

In the large vicarage a short distance down the road lived the Rev. Rivers and his family. One of whom was the Dr. William Rivers of World War 1 fame and his diagnosis and treatment of shell shock. Today it has wider implications in the form of PTSD.

All people that on Earth do dwell?