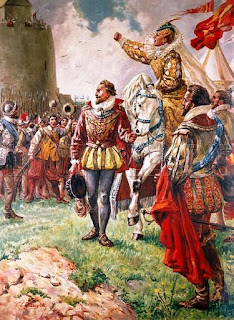 As we come to the end of a difficult and demanding year, my husband and I have begun to consider not our own future but that of all the peoples of the United Kingdom.  We have agreed that we should leave a legacy to them which should be the greatest service possible to mark the sixty years since the Coronation.

To that end I will dissolve Parliament on the first day of January and make a Declaration of British Independence.  As the existing government has chosen to use the Royal Prerogative to force through change so will I use it to reinstate and repair the essential principles of the British Constitution in a new structure of government and elections.

This will require a period of interim government of brave and devoted people to make the transition and put in place a governance which will be truly democratic, responsive to the real needs and wishes of our peoples and allow the United Kingdom to regain control and authority over its own affairs.

We have learned that there are no less than fourteen thousand treaty and agreement commitments and obligations that have been made, largely during my own reign.  I look back on this with a feeling of shame that I have been a party to the careless shedding of sovereignty and loss of responsibility that has occurred on such a scale and with so little thought as to the effects and consequences.

With the Dissolution of Parliament will be a decree to the effect that the end of this form of government equally means an end to the membership of the European Union.  For whatever arrangements would be sensible or useful in the future we will look forward with interest to any constructive proposals that might be made from Brussels.

The intention will be that any agreements made for trade or for common aspects of law or regulation neither will Brussels be binding on the United Kingdom nor vice versa.  Whether or not any legislation or regulation in Europe applies there, it will apply in the UK only on the full agreement of the new form of Parliament to be elected in the course of the coming year and can be amended or ended by the will of that Parliament.

Equally, we will take a good hard look at the range of United Nations and related organisation commitments that have been entered into in the past.  I have no doubt that some are now redundant and some damaging to our economy and polity.  We shall attempt to keep the best and rid ourselves of the worst.

Further to that it is my intention, after much heart searching and thought to abolish the Commonwealth.  I deeply regret that as a young and impressionable monarch I was inveigled by Harold Macmillan into this charade of empire and influence.

On a personal level this has meant welcoming some rulers who have been malign dictators, some corrupt and some evil along with many others who were good men and women in their ways but whose connection to the UK has become increasingly tenuous.

I am bound to say that  the Commonwealth has become at best a salesman's convention.  To that end our Foreign and Commonwealth Office has become a dishonest and corrupt sales operation.  It will disbanded forthwith and replaced by a new department whose duties will be the analysis of real policy and the gathering of hard information to enable us to conduct foreign affairs on a sensible and peaceful basis.  The old Foreign Office Library will be restored forthwith.

The Special Relationship with the USA similarly will be declared to be at the end of its useful life.  It has decayed already to become an embarrassing and grovelling fiction that serves little purpose other than to involve us in unnecessary and dangerous wars.  Clearly we will want to continue sound diplomatic and trading contacts and relationships that are peaceful and serve our common interests but this will be done in a clear sighted manner and not masked by false pretenses.

The new Parliament will be one of two chambers both elected and both involved in legislation, regulation and the examination of administration and related activity.  Retaining the former names the House of Commons will have 350 members elected from a number of multi member constituencies to be determined and from a voting system that enables a balanced representation from all the parts of the United Kingdom.

The House of Lords, the word "Lord" has long been an elastic description, will be of either 150 members elected on a different basis or made up of three representatives from each of the counties of the United Kingdom.  This will be determined by urgent discussions at an early stage.

For this purpose the ancient counties of the United Kingdom would be reinstated with the intention of a reorganisation of local government in the near future on that basis.  This I believe will enable an empowerment of the people at a far more local level than is possible at the moment.  It would be up to the individual counties to consider any joint arrangements with others for the running of services on a wider basis.

As far as possible both administration and responsibility will be devolved from many parts of our government to the local entities.  The dictatorial centralisation and micro-management that has become a deadening and destructive feature of the recent past will end and communities will be encouraged to revive their mutual support and interests in welfare.

In order to assist this the use of Private Finance Initiatives, PFI, will end and realistic and effective means of dealing with local capital investment will be introduced.  Existing PFI contracts will cease forthwith.  Those which are deemed excessive or too extractive from essential services will be replaced.  Others will be taken in to normal debt facilities.

For the National Health Service, perhaps the one that is of most interest to many the approach will be more gradualist.  It is my wish to avoid the expensive and costly series of reorganisations of the past and return to a more balanced and responsive service.  This will involve on the one hand a greater role for those in the medical professions to be matched by a more open and sensitive relationship with the public.

A particular field of interest is the Legal Profession and the administration of justice as well as maintaining law and order. It has been disquieting to me to see the manner in which Ministers of the Crown seek to intervene and comment on complex cases in court involving personal acquaintances.  It is of more concern that the complicated effect of foreign rulings and obligations have allowed the legal system to be brought into disrepute.

Clearly, police services need to be more local in many respects with a real presence on the ground, notably in districts where crime is now rampant and gangs are in control. Equally, I am aware that there is a need for both regional and national policing for other forms of crime.  I will not pretend that there are easy answers here but it is my intention to be rigorous in setting up arrangements which meet the crying needs of our time.

One area in which I will take a personal interest is in the pursuit of financial crime and fraud.  There will be a thorough and vigorous approach to this on the basis that much of what has occurred is akin to the vicious piracy of old and deserves to be treated as such.  Britain has been captured and colonised by those engaged in global commercial interests whose only ambition is for personal profit, control and the extraction of our wealth, both public and private.  This is entailing the enslavery of our peoples to those interests.

There are many other aspects of the Constitution and our lives  which need either restoration or a new approach to the different and fast changing world in which we live.  Our present sclerotic, corrupt and secretive system is simply too bad and flawed to work and is actively damaging every aspect of our lives.  It has to end.

Last but far from least there is the primary function of The Crown, that is the Defence of the Realm.  In the new forms of aerial war and its needs the Royal Air Force will need much new equipment and facilities.  The Senior Service, the Royal Navy will have to be given wider scope and enabled to both defend and watch our shores.

Then there is the Army.  The thoughtless and ill considered serial reorganisations since the 1960's have reduced it past the minimum necessary for it to fulfil its wider duties in many spheres.  Moreover, at one time the Army was both local and part of the heart of our communities.  To fulfil that role it is my intention to restore the structure of County and other regiments as far as possible and notably enable the Cavalry to become a truly mobile force.

In Scotland the former regiments will be restored to their communities.  Among the first decrees I will issue in January will be for the re-mustering of that fine and loyal regiment, The Scottish Rifles, The Cameronians and I shall be proud and pleased to take the salute at their first parade.

My husband and I wish you all a happy Christmas and this time our wish for a New Year that leads to progress and prosperity may become a reality.