Dancing To The Music Of Time 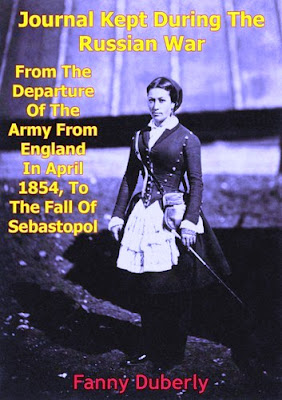 Being saved to the box is the 1968 film, "The Charge Of The Light Brigade" made at a time when the Lefties made it fashionable to look down our noses at the military. The USA being in Vietnam had us very worried that we might become involved. Having just scrambled out of nearly all the Empire all we wanted to do was sit back and think of consumerism.

The cartoon characters of the film about the Crimean War of 1854 to 1856 if anything detracted from the reality of the disaster and the failures of government and command that were entailed. In particular one character; Mrs. Duberly, who went to the Crimea with her husband was a travesty of the real Fanny Duberly, see Wikipedia, whose journal is an invaluable part of the history.

Yesterday, I was reading The Bedfordshire Mercury of January 1867, one likes to keep up to date, and came across a major front page story that tells us much about the past of that period. It is a report on the Oakley Hunt Ball, and there are the Duberly's along with others of very high society, headed by the 7th Duke of Manchester.

The ball began at 10.00 p.m. and ended at 4.00 a.m.; today's teenagers and young have nothing on the vitality of their ancestors and a great time was had by all, well all the guests. The poor lot who had to serve and wait on them and all the carriage men outside may not have done, and the band played on with the dances of the time; physically I think a lot more demanding that the twerks and twists of the present.

The list of names is a long one. Perhaps a full scale analysis of who and what they were could be done, but it would take time and be more of an academic research job than a brief blog. But there in a provincial town, which just happened to be close to the Whitbread estate, one of the richest families in Britain, if not the world at the time.

This family in the histories are listed with the Whigs and reformers etc. notably because of the inter marriage with the Grey's of Howick, who had a Prime Minister and private secretaries to Queen Victoria among them, let alone other marriages into the landed aristocracy.

One name on the list of guests at the ball is Mr. T.A. Macan, Turner Arthur Macan, a child of Mrs. Whitbread from her first marriage. The military were well represented at the ball, and he had been one himself before selling his commission on being set up as a local squire, magistrate and Master of the Hunt by William Henry Whitbread. His father, also Turner Macan, had died in Bengal in July 1836.

William Henry Whitbread was a leading figure in the scholarship of Eastern Studies arising from his senior position in the Royal Asiatic Society and Turner Macan the elder had played a crucial role in salvaging the Shah Nameh of Firdausi and The Thousand and One Nights from Middle Eastern literature of the long past, almost wiped out with much else from the ancient cultures there by the rise of strict Islam.

It seems such a minor event, a local hunt ball in a small town, yet there could be much more to it than that. It wasn't many years later when the East India Company was dissolved and Queen Victoria became Empress of India.