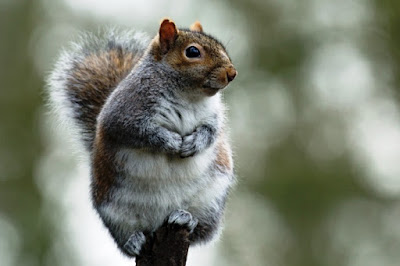 We humans in the relatively short period of our stay on this planet have been obliged to share it with many other forms of life.  The relationship has sometimes been happy for us, they have fed us one way or another.

There have been unhappy cases where the various bugs, bacteria, viruses and microbes remind us that we may think ourselves supreme but this is not the case. This link from Phys Org reminds us of one of the better known ones.

It is not simple but very complicated and ever changing.  The next plague is just the next bug bus to come along, except the bugs are more reliable than the buses.  A bug can get into one thing that is carried by another to be picked up by a human later.

When we came to live in our present home and met the neighbours I mentioned to one that it was nice to have busy grey squirrels around, it was very green and all that.

Alas, he was a naturalist who knew his nature.  I was told firmly but kindly because of my evident lack of nature that grey squirrels were rodents with habits in common with others.

Also, they were driving out the red squirrels native to our land.  This is a debate that I will not go into here.

If it was hard for me to expel all the Beatrix Potter and like ideas from my head it is much harder for many others.  Squirrel Nutkin, being red, might be another thing, but his Grey and intrusive cousins are quite another.

Recently, however, a group of University of Glasgow researchers took a detailed look at the grey squirrels to see what they might be host to.

This is what they have found that they could be an agent for carrying Lyme Disease via the ticks and mite they collect as well as the nuts. This is a serious and dangerous disease which starts with a small bite from an infected tick.

The USA Lyme Disease Association has a great deal on the subject and there are many other links.  It is not something that can easily be cured.  For many it seems to linger for very long and become almost permanent.  This posits another risk.

That the ill health afterwards may be Lyme Disease but the damage done to other body systems could leave those affected vulnerable to other problems that might not be easily detected or diagnosed.

In the UK the obvious questions are those concerning the National Health Service.  Was this one ever considered in all those planning and strategy meetings?

It is not the first time that a serious health issue has arisen with little warning and less knowledge about how to deal with it.

Keep an eye on the bite if bitten is the only advice I can give.