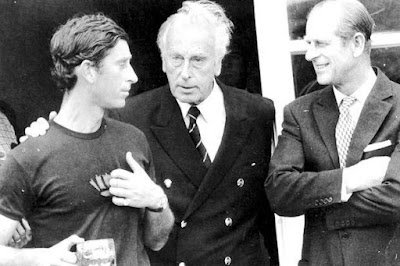 In August 1979 the IRA murdered Lord Louis Mountbatten, then a 79 year old man, along with many others in a series of atrocities.  He was one of the Royal Family, loved, respected and admired by them for his record as a naval officer and in politics and government.

In February 1952 Her Majesty suddenly became Queen.  She had been given some preparation for this, better than many others, but was still just a young mother.  Mountbatten was one of the small group of people who helped her in the transition to Head of State.

His particular contribution was to advise her on how to handle the endless paper work and understand the questions and issues that arose.  In particular how to deal with all the many and various people she would meet in the course of her official duties.

Lord Hardinge was there to advise and assist on all matters relating to the Court and protocol, others for technical matters.  But it was Mountbatten who was the key to handling the politicians etc and public business as well as all the foreign dignitaries.

Jeremy Corbyn in 1979 was a local councillor at Haringey, a London Borough, one of those floating Left Wingers who had taken advantage of the recent reorganisations of local government which had the unintended consequence of enabling local politicians to live on their expenses and allowances.

That is, so long as they kept the groups who supported them happy.  Haringey at that time had a reputation amongst those in the trade as being a good place to avoid at all costs.  Not only were there extremists but it was highly politicised and, I quote, "the biggest shambles since Mons".

Corbyn had nothing to do with anything the extremists did.  He was simply one of the loose chatterati of the time who served as running dogs to some of the groups.  These included Irish elements who would have had contacts with the IRA.  Never in a month of Sundays would they have allowed unreliable mouthy local politicians near their operations.

But when Corbyn does meet The Queen the memory of Mountbatten will be there, as well as those of a large number of other people whose occasions of violent death that she will remember but Corbyn has forgotten.  Corbyn has the problem that whatever he said at the time and since about the murder will be known to The Queen.  But that leads to the other problem.

For 63 years Her Majesty has been one of the best informed and briefed Heads of State in the world.  Also, she does not need to remember it all because she has an archive and staff with the ability to inform her if not in minutes then within hours.  Other material and information can be sought at will.

Also, there is her other life experience.  She was trained to drive and maintain trucks.  She has deep knowledge and ability in the world of horses and the country.  There have been royal estates to manage.  She has met and talked to most of the world's leaders in her time and she has visited many places.  Again, in this public work there has been the briefings and information backup.

And she is a bright and perceptive lady.  She does not miss much and if you do want to argue with her you will need to be sure of your case and the facts or she could politely and carefully shred you.  Perhaps, like Mrs. Thatcher, Jeremy might be best sticking to the facts and getting out fast.

Or has he already chickened out?