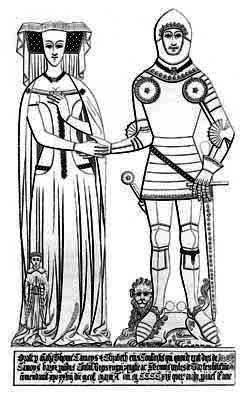 There is a great deal of comment referring to the Battle of Agincourt where some of my lot did for the French 600 years ago.  Later we lost the war under another King.  I have been there and have done a lot of reading.

One advantage of genealogy is that you have to look at who was who, who they were related to and connected with and also what they had been up to during their lives.  The picture above is of Thomas, Lord Camoys and his wife Elizabeth Mortimer.

He commanded the Left Wing of the Army, but his Knight of the Pennant (Chief of Staff) was Sir Thomas of Hoo, a capable and experienced hard case.  One of the Captains of Archers, perhaps the key one, was one of his chief tenants.

Going round the Knights and Captains, you are seeing a lot of very experienced and indeed ruthless men who know each other and have a clear idea of the chain of command and what needs to be done.  The French did not.

It is a lesson of history we too often forget and at a price.