Will There Be A Welcome In The Valleys? 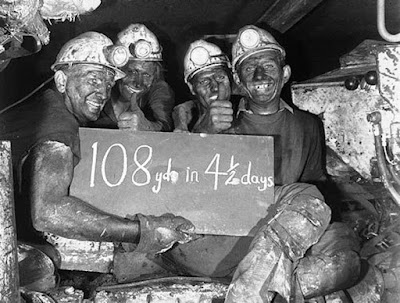 Among the many promises for the future being flung about in the debate on the Labour leadership election there are those to take us back to what was to make what will be.  Some are easier than others.  The promise of new coal mines sounds easy but is not.

This UK Coal web site gives a fair amount of basic information related to deep mining.  It had two mines, Thoresby and Kellingley, both gone.  They had been kept going with government support which ended.  This has to do not simply with subsidy and debt but climate policy and carbon emissions.

Is Labour talking about far more extensive open cast mining across Wales and the odd drift mine for specialist coals?  If it is deep mines then the idea that opening new ones in South Wales will be a restoration to existing communities they need to think again.

Assuming Labour win in 2020 it would take a good ten years to create new deep mines, if not more.  By that time just how many of those former deep mines communities have gone?  Probably most of them and in a number of areas all leaving a remnant body of labour.

Also, such deep mines will need thick seams over extensive areas to allow modern methods to be applied. The deeper and more you go means serious challenges in geology and the physics; do I need to go into the air and water issues?

Then there is the subsidence.  Having lived in worked in mining areas this is a major issue.  What is to be done with all the waste?  Take it back down again?  Dump it in the sea?  Put on top of hills to create mountains for winter sports?

Are the proposals made in the hope of achieving continuing and real profits?  Or is the idea that state subsidies here will allow benefits and savings elsewhere in energy use or overall impact?  They might be creating jobs, money flows raising taxes and reducing benefits.

Inevitably, this raises many questions about the existing energy companies, probably regarded as candidates for state control.  But the money realities remain.  Will highly subsidised mining need high energy prices to pay for it?  Back to square one as they used to say in the 1930's but there is a price to be paid, one way or another.

If the mantra is jobs and incomes to communities it would be a very expensive and risky way of doing it.  The question is could money be spent on other forms of job creation which would yield far better and more reliable returns?   What other economic activities are possible without wrecking the environment?

Not least will be the wage and benefits levels for those who do the work.  Presumably, Labour does not want cheap labour.  To make the figures work better importing low wage labour from the East might make sense to private operators.

Given the muddle of thinking in the Labour Party they are all too likely to import the labour for the new state mines and then pay them top dollar, especially if the locals don't like the idea of going down or working in mines.

Bring back the trolley buses.