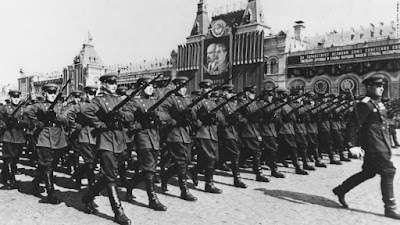 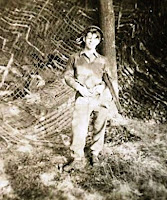 It slipped my mind a few weeks ago, but is now recalled.  In May it was the 60th Anniversary of a famous event which shaped all our lives, one way or another.  Yet while some may remember it is now forgotten, but perhaps it is time to recall it with the events in Eastern Europe.

It was the signing of the Warsaw Pact in May 1955 and the foundation of the Warsaw Pact Organisation comprising the USSR, very much in charge, and its major satellite nations.  See Wikipedia etc.  It was meant to be the counter to NATO created a few years earlier and seen by the East as a threat rather than a defensive alliance.

The Pact collapsed when the USSR imploded and is now history, up to a point.  President Putin may have other ideas, especially with the EU trying to take over the territories to the Urals with NATO said to be in tow.

1955 is a long time ago.  The two pictures above are a May Day parade in Red Square at the time of Soviet troops, and one from March 1955 of a typical British squaddie in NATO's key defense formation in the field a short distance away from the East German border.

You may wonder about the potential effectiveness of NATO if things did get serious.  It is not entirely surprising that it was not long before the UK abandoned National Service and the West relied on the nuclear deterrent.

The question is, are things any better today?