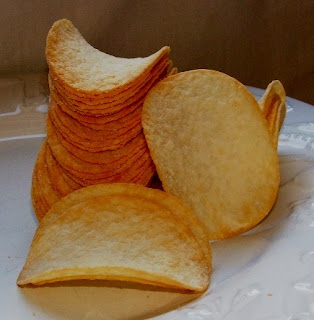 There is no shortage of news items for those of a nervous disposition.  The danger of resistance to antibiotic treatment arising from too many making too much use of them when not needed is there again.

Also there is the menace of the march of mutant head lice.  Those of us who remember the school nit nurses with affection from days past might welcome their return.

There are all the volcanoes on the go, earthquakes due in areas with high populations imminent, asteroids a plenty and the universe is now said to be ageing, anyone for a black hole holiday?  Last but not least there are flocks of Black Swans up there ready and waiting to cause the next bank bust.

So we look to our government to lead us with wisdom, foresight and the ability to watch over our interests.  But what do we find?  Our Prime Minister, Primus Inter Pares himself has been revealed to be a junk food addict.  He was caught scoffing a whole tube of Pringles on a plane journey and is said to be a fan of them.

The full sorry story is here in The Mail which does not pull its punches.  A sample of the article is this:

Today, they may be sold in the crisps aisles of supermarkets, but the resemblance to an ordinary potato crisp ends there.
Pringles are made from a sludge of potato flakes, corn flour, wheat starch and rice flour, mixed with water and preservatives.

This slurry is rolled into a thin sheet and cut by machine into ovals, which are pressed into their distinctive curved shape on a conveyor belt and fried in vegetable oil for exactly 11 seconds.

Excess oil is blown off before they are sprayed with powdered flavourings and seasoning, stacked together and inserted into tubes.  As food goes, it’s about as natural as those other inventions of the Sixties — Pop Tarts, Smash instant mash and Angel Delight.

My in house qualified food chemist reminds me that in the last couple decades major advances in particle chemistry, viscosity and other features means that products today pack a much bigger punch and effect than those of the past.  Moreover, they do this with what is far smaller quantities of the actual synthetics, in some cases enabling use which might otherwise have exceeded regulations.

The manufacturers, and their scientists, insist that there are no problems and the products do not have the side effects claimed, save perhaps for a few ultra sensitive people or those with existing serious conditions.

If the adverse claims are true and the products not only affect the body but via the circulation of the blood, another debatable theory, have some impact on neural function then what we might expect?

A person affected might be prone to mood swings, have problems making decisions, struggle with figures, say one thing one day and then another on the next day, lose contact with realities, retreat into escaping work and responsibility, be variable in relations with colleagues and other people and altogether fail in their grasp of what is to be done and how.

Can this be said of Cameron?