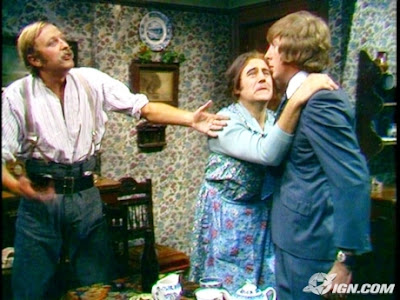 The screening of a new version by the BBC of the DH Lawrence tale of class diversity, "Lady Chatterley's Lover" is said to be one of those where little is left to the imagination.

For those who recall the legal to-do's of over fifty years ago on publication the shift (or without shift) in thinking reminds of not so much a more innocent past, but at least a discrete one.

The literati may have lauded it as a "great work" but the average reader and those whose reading came in plain brown envelopes saw it as a bit of a giggle.

For me the definitive comment on DH Lawrence was the Monty Python sketch, "Working-Class Playwright", text below.

Followed By A Scotsman on a Horse

(Opening Scene : A sitting room straight out of H. Lawrence. Mum, wiping her hands on her apron is ushering in a young man in a suit. They are a Northern couple both wearing working clothes, the husband with the trousers tied at the knees, and in a union shirt and waistcoat.)

Mum (Terry Jones): Oh dad, look who's come to see us. It's our Ken.
Dad (Graham Chapman): (without looking up) Aye, and about bloody time if you ask me.
Ken (Eric Idle): Aren't you pleased to see me, father?
Mum: (squeezing his arm reassuringly) Of course he's pleased to see you, Ken, he...
Dad: All right, woman, all right I've got a tongue in my head - I'll do 'talkin'. (looks at Ken distastefully) Aye... I like yer fancy suit. Is that what they're wearing up in now?
Ken: It's just an ordinary suit, father. It's all I've got apart from the overalls.

Ken: Oh not that again.
Mum: He's had a hard day dear, his new play opens at the National Theatre tomorrow.
Ken: Oh that's good.
Dad: Good! Good? What do you know about it? What do you know about getting up at five o'clock in t'morning to fly to Paris, back at the Old Vic for drinks at twelve, sweating the day through press interviews, television interviews and getting back here at ten to wrestle with the problem of a homosexual nymphomaniac drug-addict involved in the ritual murder of a well known Scottish footballer. That's a full working day, lad, and don't you forget it!

Mum: Oh, don't shout at the boy, father.
Dad: Aye, 'ampstead wasn't good enough for you, was it? You had to go poncing off to , you and yer coal-mining friends. (spits)
Ken: Coal-mining is a wonderful thing father, but it's something you'll never understand. Just look at you!
Mum: Oh Ken! Be careful! You know what he's like after a few novels.
Dad: Oh come on lad! Come on, out wi' it! What's wrong wi' me? You tit!

Mum: Oh please!
Dad: Aaaaaaagh! (clutches hands and sinks to knees)
Mum: Oh no!
Ken: What is it?
Mum: Oh, it's his writer's cramp!
Ken: You never told me about this.
Mum: No, we didn't like to, Kenny.
Dad: I'm all right! I'm all right, woman. Just get him out of here

Mum: Oh Ken! You'd better go.
Ken: All right. I'm going.
Dad: After all we've done for him...
Ken: (at the door) One day you'll realize there's more to life than culture. There's dirt, and smoke, and good honest sweat!
Dad: Get out! Get out! Get OUT! You... LABOURER!
(Ken goes. Shocked silence. Dad goes to table and takes the cover off the typewriter.)

Dad: Hey, you know, mother, I think there's a play there. Get t'agent on t'phone.
Mum: Aye I think you're right, Frank, it could express, it could express a vital theme of our age.
Dad: Aye.

(In the room beneath a man is standing on a chair banging on the ceiling with a broom.)

Man ( Palin): Oh shut up! (bang bang) Shut up! (they stop talking upstairs) Oh, that's better. (he climbs down and looks at the camera)
And now for something completely different... a man with three buttocks...

Mum and Dad: (from upstairs) We've done that!
(The man looks up slightly disconcerted.)
Man: Oh all right. All right! A man with nine legs.
Voice Off: He ran away.

Man: Oh Bloody Hell! Er... a Scotsman on a horse!  Cut to film of a Scotsman [John Cleese] riding up on a home. He looks around, puzzled. Cut to stock film of Women's Institute audience applauding.

Cut to the man with two noses (Graham Chapman); he puts a handkerchief to his elbow and we hear the sound of a nose being blown.
Cut to Women's Institute audience applauding.