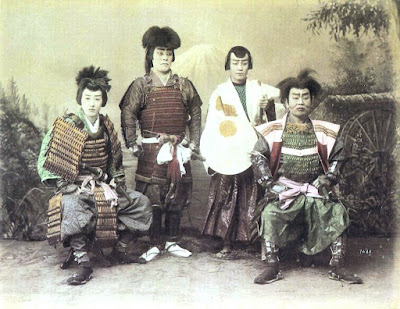 As the race for Leader of the Labour Party closes to the line the four candidates are torn between traditional codes of unity, see the picture above, and the need to be different to make their claim.  This has led to disputes and ill feeling.

It is always very sad when people who were close in their views and ideas as youngsters become different people in advancing age and bitterly opposed to each other and their beliefs.  Yes, I am talking about Tony Blair and Jeremy Corbyn.

As teenagers they were both fans of the leading left pop group of the Soviet Union, "Kosygin And The Commissars".  Who can ever forget their smash hits, "We All Live In A Nuclear Submarine" and "I Ain't Got No Electrification" that made it to number one in the Gulag charts?

Perhaps it is the pigeon issue that has torn them apart. It was during the era of Blair and before that reformists changed the face of Britain by declaring pigeons a feral health risk.  Once Britons used to fling their food happily and some even go hungry to help the flapping friends get fat and breed and do more breeding.

Nosy scientists claiming that with the pigeons came other things, insects and microbes in plenty.  But humans have always had fleas and things, why should pigeons pay the price for intrusive hygiene?  Then there are the green issues.  Natural is good.

According to figures available twenty five pigeons can deliver a ton of droppings a year, a form of Green Quantitative Easing, so if an average household can maintain a flock of a hundred on the roof there are four free tons of rich fertiliser to nurture our plant life and vigorous communities of other life.

So when Jeremy wants to set the pigeons free to be welcomed by all he is living the ultimate dream.  That is we will have all the fertiliser we want at will and in quantities that will allow us to give freely of it to others.  Newcomers to our land can be given pigeons on arrival and help to raise the tonnage.

Indeed there may be a little added maintenance and repair costs to our gutters, roofs and other things.  But these purely incidental costs will help stimulate economic growth and provide work for lower paid labour.  For a truly socialist economy pigeon droppings can only be a win win feature, nationalised and with their own Five Year Plan.

Ignore the pessimists who talk of disease.  Pigeons do not smoke and drink alcohol; this means they are healthy.  In any event a few transmitted aches, pains and septic flea bites are a small price to pay and will help to increase spending on the NHS which is something we all want.

There is a different view expressed here in two minutes on Youtube by Tom Lehrer a little time ago if you want to be serious about it.