Not Playing The Game 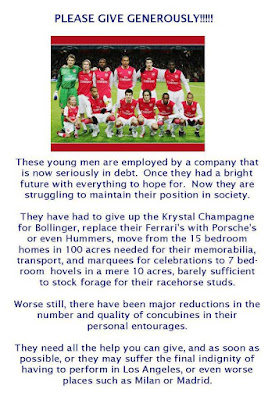 In case you didn't notice the main football season in England and Wales has kicked off this weekend.  One reason you may have failed to pick up on this is that despite last season ending in theory there have been a great many matches for this or that reason.

The news and attention given to the game has been relentless whether or not teams are playing for other reasons.  The bodies running the game, once regarded as august assemblies of noble men giving time to their sport seem to be just like other money men.

The players may still be role models but in a very different way of life and in their personal habits and frailties.  On top of it all the ownership, managing and financing of clubs is now a different world.  Last but not least whereas once football on TV was a rare and special event, now there is more than enough, if you want to pay.

One can only sit there with jaw hung open when learning of the deal for West Ham United to use the former London Olympic Stadium.  You are paying for that as a taxpayer, whether you like it or football or not.

What of the game itself?  It was over 70 years ago when an uncle on leave took me to watch a local wartime match between leading clubs.  I have been in many grounds since and have watched a good deal on TV.  Clicking the remote to put it on these days is not a given, it is more that there isn't much else to watch.

Given the expansion of football and the extent of marketing you would imagine that its future is assured.  But is it?  Is the game becoming less interesting the more it becomes detached from ordinary life and in particular the technical playing systems now meaning that defensive tactics are in the ascendant?

Also, it there now just too much?  But at the same time the contraction of hope of the big prizes into the hands of a few clubs with the biggest money support has removed many of the ups and downs that were a key part of the interest and excitement.

Add to all the this the extra tournaments put on to get the continuing TV coverage and money and the expanded programmes of international matches and it all begins to become a lot to take.  In the last decade or so there has been a major expansion of all this and this seems to be continuing.

In short there is an over supply and one more difficult to control or to understand. There are other factors too, the general social and economic changes at work in our urbanised districts that gave birth and sustained the modern football industry.  Will their new populations have the interest in this?

Is the football industry another big financial bubble that could burst, if not soon, then in the foreseeable future?  It is only a game and becoming a less interesting one coupled with becoming remote from its traditional supporter base and more reliant on a much more fickle viewing public.

With the expansion of TV and communications facilities there are a lot more things to watch, or do, or follow than a football industry that is becoming boring, part of the past and too often unattractive and tiresome in its people as well.