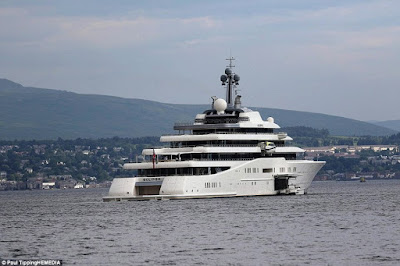 The coverage of Roman Obramavich's recent visit in his splendid personal cruise liner, alleged "yacht", to the Clyde along with several men of like mind and money excited some of the media.

It made a change from St. Tropez where he has a large villa and floating around the beach at Pampelonne, surveying the scenery and murmuring "Phwoar" as he sips his vintage Chateau Paysan.

Inevitably, it led to ideas about him "investing" in a local soccer club, notably Morton F.C. located in Greenock, a once leading club recently having hard times.  Why he should so when other matters may have been on his mind was not considered; football being of supreme interest.

There was the suggestion that he was copying the example of The Royal Family only bigger and better.  I would like think he was following in the footsteps of Felix Mendelssohn and also visiting the home town of Hamish MacCunn; if musically inclined, but this is a long shot.

Two of my four great grandfather's spent their working lives in the boiler rooms of ocean going ships.  One, born in Greenock but of an Ayr family, worked for the Greenock Steamship Company and its successor.  His wife, daughter of a ship's carpenter, was also born there.

Her father was well acquainted with the local magistrates because of his fighting skills, according to the Court Reports in the local newspapers of the time.  Nevertheless one of her near cousins was a founder of Morton F.C., because of his Temperance interests, shared with Great Grandfather.  Life is never simple.

Roman and friends went walkabout on the Isle of Arran, another ancestral acreage, fishermen and run riggers, to add to it, which prompted the thought, how much of it, if any, does any of them own and where is title to it located?

Which leads to the question of just how much of Scotland do members of this group own on the same basis?  Personally, I would doubt that their property and land portfolios will be restricted to London.  But like London, ownership will be off shore in a reliable little haven.

The obvious attractions in the past of investing in Scottish land would have meant that they could have large scale interests.  As we are too aware north of the Border the right money put into the right hands can work wonders.

If Donald Trump, currently more interested in taking over the USA, cheaper and easier to run, could do it, why couldn't some of Russia's biggest operators?

Has anyone been watching GazProm lately?  This is only the beginning.