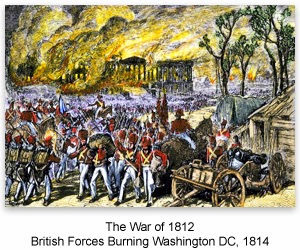 As we are all well aware in recent weeks there has been a great deal of attention given to the centenary of the beginning of the First World War and its consequences.  Also, it is common now to recall and revisit other anniversaries where there was an impact on the futures to come.

One that is notably absent from the list is the 200th anniversary of the Battle of Bladensburg on Thursday 14 August and the torching of Washington DC.  This is relegated from the lists of history that is taught.  But it did have one effect and that is in USA foreign policy the British were the main enemy.

Because of what we call World War One and Two it is assumed that this ended in the 20th Century.  But it is now beginning to dawn on us in the UK that this was not the case.  There may have been a need for the pretence of friendship but in fact despite closeness needed because of bigger threats, the UK was always regarded as a threat to US business and ambitions.

This officer and gentleman was a key man in 1814.  One of the Brooke family which later included Alan Brooke of WW2 fame, Arthur was a formidable soldier.  There are enough links in the article to find out about the 1812 War, one inspired by politicians looking for the main chance.

The whole history of this is a sorry one for both sides and its ludicrous ending with a major battle fought after the Peace Treaty was signed because of the time taken for news to cross the Atlantic says much about it.

For history we tend only to look our successes or the most obvious failures.  We do not look much at the many and various fiascos, serious misjudgments, consequences of over arching ambition and arrogance or decisions made in haste or on bad or negligible intelligence.

Bladensburg and this whole campaign is not something to celebrate, only to wonder how both sides were so foolish to get into it.

And still it goes on.