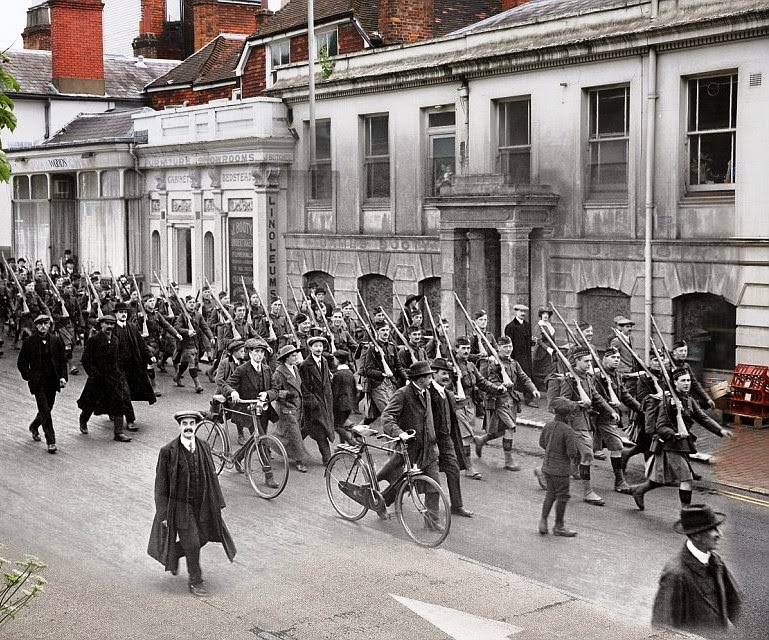 The picture above is a battalion of the Kings Liverpool Scottish marching through Royal Tunbridge Wells on their way to Folkestone and The Front in 1914.

Today has been one of solemn ceremonies and Remembrance to mark the hundred years since World War One began.  For some that is, for most it seemed that shopping was a priority.  For one reason or another such things are now for a dwindling minority of the population.

The great questions and issues about how the War began, who was at fault, just what did happen and why are being discussed and gone over.  There are many differences of opinion and despite all the information it is still far from clear.  Perhaps this is because there was so much muddle, misunderstanding and mistakes made at the time by all parties.

As a young man often I worked with, knew or dealt with veterans of that War.  But between the ignorance of youth, the more recent World War Two, and the little they said or referred to, there was no indication or talk about what they had done and where they had served.

One of my professors had served as a Sergeant in the trenches yet our tutorial groups were concerned with the causes of the Second World War and his experience was never mentioned or referred to.  It was a closed door as was the case with all the other veterans.

Now the great question is my mind is why did my Grandfather volunteer for his local Pals battalions at the outset of War? Over thirty, skilled in his trade, sober in his habits, with family responsibilities, not a military type by any means and a hard headed practical man, why did he sign on?

The archive films show cheerful, confident, smiling, joking groups of men going off to War as though they were on a day out to the seaside or about to enjoy a football match.  Did it all seem just a great game that would soon be over?

What I do remember as a child is the sudden shouting in the night and then seeing him outside sweating and staring in the first cold light of dawn.