1320 The Declaration Of Arbroath Part Three 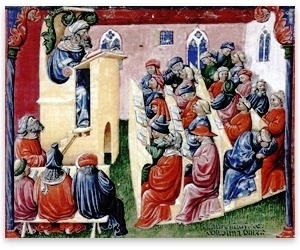 The assembly at Arbroath was framed in terms of others that had come to be a regular practice on the continent, parallel to, and seeking to have the status of other assemblies addressing similar questions.  The debate over similarities with earlier purely English charters or methods is misleading, and has distracted attention from the more important arenas of political and theological activity at that time.  The 1215 Magna Carta of King John of England may be a stylish document, but in essence was a set of property arrangements between a landless King and his obstreperous Barons.

Because of the role played by the Religious interests, their function, and the purpose of the Declaration, it could not be a purely ad hoc Scottish formula.  It had to be consistent with the established procedures with which the Pope was familiar and by which the regular business of the Curia was conducted in the period.  The events on the continent in the immediate preceding period created a many and varied precedents for an event and a plea of this kind, and therefore the Declaration that resulted.

The key question is what was realistic for the Scots at the time.  Did they believe that the Declaration of itself was enough to assure the French of a continued close association in terms of Scotland being a wholly independent entity?  But was that really possible in the European economic conditions of the period with much of Scotland being an impoverished upland grazing ground at the end of the Atlantic Archipelago, bereft of either bullion or an established merchant class of any size?

Then there was the difficult theological question, that no temporal ruler or principality, or even Empire, could be independent.  God ruled, through his Word, and the Church was the means of delivery. So did the Scots in real terms opt for the indirect status, effectively, of a Papal State via the Magistracy of the Papacy, itself then a satellite of France?

The Scots elite did not want to be as they were at the time, a small entity under permanent threat from its larger southern neighbour.  They were also vulnerable.  The Great Famine of 1315-1317 had left its mark across Northern Europe, more so in the poorer less fertile areas than the richer.  The failed attempt to extend authority in Ireland, 1316-1318, and defeat at Dundalk, had reduced their military capability.

The confusion of the period has several conflicting possibilities.  It may be that not one, but all could have been in play in the shifting politics and anxiety of the age.  And, there was still Norway to the north, and in possession of the Shetland Isles.  The ice was moving south as the climate deteriorated and forcing the sons of Vikings to look at their options.

The global cooling was having its effects across Europe, bringing hunger and storms and the loss of more than crops.  In the 1320’s, the sea took almost all the great port of Dunwich in Suffolk; where a local Scott family were leading merchants.  An isolated untroubled wholly independent status was not a realistic option.  Protection and moral authority had to come from somewhere and the King and main body of nobles did not want to associate with the flawed, unpredictable, violent monarchy of England, its magnates, and their hired mercenaries.

The potential problems in the continuing dispute between France and England were a witches brew, a maelstrom of ambition for territory, for revenues, for power, mingled with a hatred for The Other whether foe or family. There is little to be certain about.  Isabella, the daughter of King Philip IV The Fair, as an ambitious Queen of England and becoming distant from King Edward II, had her own furrow to plough, that was not parallel to that of her husband’s.  In 1314 it had been necessary for the King of England to attempt to secure Scotland before proceeding to take on France over the quarrels that concerned the Fief of Gascony, then held by the Kings of England under homage to the King of France.

By 1319 one serious possibility she had to consider was that her French brother with his urgent reforms was planning to intervene in Gascony or England itself if the situation deteriorated there to the point of chaos.  It would not be a new idea.  In 1215 during the crisis of the final years of the reign of King John of England, the Prince Louis of France, heir to the throne of France, had landed in England, established himself in Kent, and had been offered the throne of England by a number of Barons.

In the same year the Barons of Northumberland had offered to change their allegiance from King John to Alexander, King of Scots.  It was feasible that a similar venture could be undertaken with the Scots support and their price for the head of King Edward II being that they would retain their self governing status as a Quasi Papal State similar to others in Europe but in tutelage and under subsidy to the French.

In the French bracket of the equation of power is another element, the issue of the invocation of the Salic Law in France in 1317 when King Philip V, then without issue himself, took steps to set aside the claims of his infant niece, the only surviving child of King Louis X.  This applied not only to her prospective children, but also to his sister, Queen Isabella of England, and to her son the future King Edward III of England, incidentally protecting the claims of the then Comte de Valois, uncle to King Philip V.  Looking at their genealogies if the Salic Law were applied retrospectively then a great many further complications could arise.

For example, King Henry II of England, the founding King of the House of Anjou, the Plantagenets, had inherited through his mother, and so King Edward II arguably could be a false King.  In the later parts of the 14th Century the business and arguments over the Salic Law formed one of several casus belli in the Hundred Years War between the Norman-French in England and the French-Normans in Paris.

Also, the events of the three years to 1317 had changed the game and Queen Isabel could be just a heartbeat from the throne of France in her own right and so the right of her son.  If France fell to Isabel were she to overturn the new implementation of the Salic Law, then Scotland could be dealt with on her own terms and in her own time.  What would have been the options of the Valois claimants to the throne of France to deal with this continuing threat?  The Valois may have needed the Scots as much as King Philip V, a useful conjunction of interests in the debates over the Declaration.  The fog of politics leads to the fog of war.

It is impossible to be clear about which great matter might have been the key to policy, nor should one assume consistency or rationality in policy making or responses.  If there seem to be conflicting issues, this would have been the way of the times.  In the 21st Century, even with modern communications and systems, governments are still prone to incoherence in their business.  In 1320 there was clearly a complete lack of coherence of any sort in England, but one should not assume that this implies the opposite in Avignon, Paris, or Arbroath.

For France links and alliances with Scotland were necessary to the curbing of the Kings of England and their ambitions to recreate the Empire of the Angevins, and to assert their claim to France.  But it was a separate Scotland they wanted, within their influence and control, although perhaps augmented by the lands of the ancient Kingdom of Northumbria.  What they did not want was a King of Scots to take control of England, and then assume the ambitions and policies of its Norman Kings.

If a militarily capable entity such as the King of Scots was able to persuade those magnates of England who were locked in dispute with their King to support him, then England could be taken in a single campaign, especially if the Merchants in London backed them.

A forgotten factor is that, as well as the descent from King Henry I through his bastard son Robert, Earl of Gloucester, and being Kin of the Conqueror through the De Clare connections, King Robert de Brus had a claim by a series of legitimate births to the Throne of England by his descent from St. Margaret, Queen of Scotland and wife of King Malcolm III, Caennmor.

But the ambitions of King Robert de Brus and his supporting nobles may have been more limited than to attempt the eventual takeover of England.  An attempt to dismantle the existing structure in England (the Scottish Stuarts and their cronies tried to do this in the 17th Century with disastrous results for the political structure and the economy of both Scotland and England) to impose the Scottish vision of Liberty; the absolute rule of the territorial baron, would have been beyond them.

Man for man, the Norman magnates in England could field many more mercenaries and men than the Scots and any takeover in England would have to be on their terms.  They were not men who were easily controlled.  But there was still opportunity within the lands of the King of England.  The Declaration states that once England was enough for several Kingdoms.  King Robert de Brus, among others, had a claim to the Earldom of Northumberland, then in abeyance, through his descent from Henry, a previous Earl and a son of King David I of Scotland.

After 1066 William The Conqueror had pursued his claims to the North of England and Northumbria with a singular ruthlessness, a vicious, destructive, devastating, depopulating campaign that is amongst the worst known in the gruesome history of Medieval Britain, and exceeded the vileness of the later atrocities by others on both sides.  As a Baron in the Borders my Liberty meant your serfdom or slavery for the taken peoples.

A later French invader might have been content to stop at the line of the Humber and the Ribble, keep the richer and productive part, and leave the scattered uplands and shattered ancient Kingdom of Northumbria as a buffer state or Scottish fiefdom.

So is the Declaration, among other things, a Scottish offer to the French of the dismemberment of England under the authority of a Pope to take advantage of the continuing weakness of King Edward II?