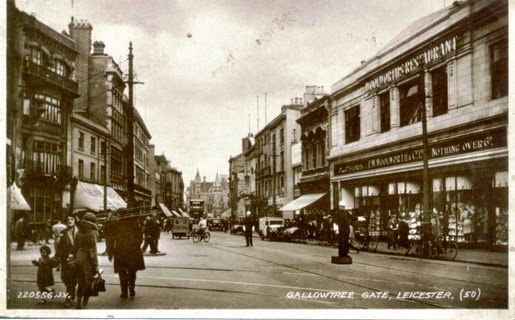 When we look at the past to think about change in the world of work the it is likely the attention is limited to a small number of heavy industries employing largely men.  These were the ones who attracted the makers of documentaries and films about social strife and politics and the dignity of labour.

Recently, the BBC ran a short series on shop work, but mostly concerned with the human interest and relative quaintness of it all.  Also, the needs and nature of this work were not the same as our conventional view of the past.  What we have lost is how large this workforce was, how structured then and its place in the communities at the time.

This was brought home to me accidentally  when events caused me to have to go into a shop other than food supplies.  Shopping is high on my personal list of ten most hated pursuits.  It was a fairly large store, on two levels, with a great many products and items.  What was striking was how few staff there were and how they worked.

Missing were whole layers of management and supervision, office staff of various kinds, and general "hands" to move things and do other jobs.  Some now the customer deals with.  These people were not only expected to be able to do all this but if my guess is correct they would not be paid much above minimum wages and be expected to work varied hours including all day Saturday and most of Sundays.

When youngsters left school at 14 and 15, across the country and in every community many would join all the shop workers at a low level.  For them this was a desirable form of work in many ways, albeit low paid for the most part and for some with a future if all went well.

Above all it both needed discipline and attention to detail.  Some of this was instilled as part of the job but mostly these were required of new workers, their schooling and parents were supposed to have taken care of that.  Counter staff were expected to have straight backs, to look people in the eye, talk coherently, be smart in appearance and to get on with the job of serving, mark that word, serve, the customer.

A consequence of this was that in some of the media and the arts, notably films, of the period, shop work and workers generally were a target for satire.  Their status as non-manual workers, the fact that they were there to oblige people and in the larger shops and stores the structured organisations requiring order and deference made them easy targets.

Few authors paid them much attention other than as a back drop.  But in the pecking order of shops those at the top in the cities might well require a Schools Certificate of new employees, even with Matriculation, that is equal to University entrance at a time when fewer than ten per cent went on to University or one of the elite colleges.

Today, employment in shop work is very different and is marked by the absence of school leavers in many places.  One reason it is said is that UK schools no longer turn out the people able or fit to do the job properly. So for large numbers a major area of work has gone.

The lack of employment in many areas, notably retail, is one reason that governments have been pushing up the school leaving age taking out a whole sector of the population from what was once a key employment sector.  In what is left of local shops with small staffs, many now are recruited from migrants who still have some of the relevant skills.

This discussion could go on for many words yet, but there are other things to do.  We need a new bit of furniture, so I must check it out online.  Perhaps I will pick one up from a shop, but perhaps not if I can find one at the right price.