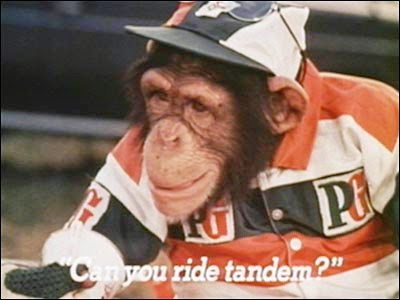 Quite apart from the rest of it, the Tour de France is in Yorkshire this weekend, which entails extended TV viewing of places we know well.  Did I really do that there back in the late 1950's?  Never mind the decades living there.

Also widely reported is the surviving Monty Python team doing it for the last time.  Perhaps one should not try to go back, too much has happened in too many ways.

This three minutes of satire is one specially remembered, if only for the intellectuals and southerners who journeyed to Barnsley at the time in search of something never to be found.  As I tried to explain to them it was all the subsidence, going back to the monks of the Middle Ages, that was the problem.

One can only hope that a few airings might be given to the commercial break for PG Tips Tea starring Cyril the Cyclist, a chimpanzee, taking part in the Tour.  Cyril had a broad Yorkshire accent, I think dubbed, but you never know.

It is here and lasts only a few seconds and the punch line comes after the plug for the tea and has a charm of its own.

In the 1970's the idea that Yorkshire might have much to do with the Tour de France was one of those surreal comic notions that gained a lot of laughs and helped the sales.  One felt it a duty to buy the tea because it was fun.

It seems that one of the German cyclists, Kittel, has complained that the Yorkshire roads are dangerous.  Given some of the roads used by the Tour this is amazing, he says the dry stone walls along narrow roads are a problem.

He may not be aware that the problem for dry stone walls is Yorkshiremen falling off their cycles and knocking them down with their heads.

They're a hard lot in Yorkshire.