The Vulnerability Of Not Knowing 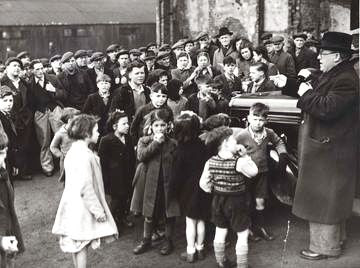 We are all wrong and there is nobody who is right. This is not going to change in the near future if at all. The UK General Election is just a minor skirmish on the edge of a major battle of ideas and we are wandering around a No Man’s Land unsure of either the terrain, who the enemy is, or when the fog of war is going to disperse.

My theory is that there is no theory that is viable at present and that all the past ideas about economics, finance, society, politics and such are redundant. Other disciplines and fields of study from time to time have to change quite radically and many today have key differences from their past forms. Unluckily when it comes to those that bear on human economic behaviour, action and belief humans have a need to hang on, sometimes literally to a grim death, to ideas ancient and modern which no longer serve.

Take “Capitalism”, the early 19th Century form of Manchester Capitalism which was understood by many thinkers at the time was to be changed after the introduction of Limited Liability eventually into a bigger and broader form that lasted until the turn of the 19th and 20th Centuries. After the stresses of rampant Imperialism and the disasters of the 1914-1918 War it was another thing in another world. There was a transition until the 1939-1945 War and in the aftermath of that a different structure emerged. This was modified by a variety of developments during the period of The Cold War and at the end of this we have experienced what we call Globalisation etc. and still use the term Capitalism.

One key difference between now and when it all began is that at the beginning many people understood what the general idea was and how it worked. One of the signal features of the recent financial collapse is that none of the owners nor senior managements of the large scale financial operations, nor their regulators, nor their governments, nor their clients had much idea of what was truly going on and why other than sightings of figures that more often than not have been false, illusory or meaningless.

Much the same type of analysis can be applied to just about all the other “Ism’s” and bundles of beliefs and ideas on which we have based our constitutions, political parties, legal systems, and governing organizations, national, international and global. It has all become too complicated for humanity to understand or control. Our zeal for good news has led to us being given manipulated information and an overload of nonsense to persuade us to keep borrowing and consuming.

One striking illustration of how things change is Lord Mandelson, grandson of Herbert Morrison and heir to the Old Labour leaders, riding around in a top of the range Ferrari with a scion of the Rothschild family on the way to meet with an old friend. The friend is a Russian multi-billionaire oligarch who built his fortune by asset stripping the product of the labours of three generations of the former Soviet proletariat. Also in the frame to be a top man at BP, well nobody gushes better than Lord Mandelson, unlike many today, employment is not a problem for him.

Which brings me to one of the key features of much of modern macroeconomics, how to achieve Full Employment. In 1945 it was the belief that Labour was the party to do this that gave them a landslide majority and let Herbert Morrison loose on the nation. One of the key thinkers was Maynard Keynes and it was his ideas that became part of the core of much theory and policy for the next generation.

However, Keynes published his General Theory in 1936 and was unable to review and revise them in the changed world post 1945. The operational functioning of the financial markets, world trade, industrial structures and systems of government had changed in such a way as to impact significantly on much of his theory. Professor Philips of LSE had devised a machine to show how it worked with flows of coloured waters but in practice blockages, leaks, faulty joins and valves were evident and bits that simply did not work like that any more.

The series of changes from 1966 to 2006 has been very radical indeed and if you follow Keynes flow plans of money, investment, interest and employment they will not work because they can no longer work because everything is so different, controls are diffused, governments are finding their real powers compromised and the complexities very much greater.

To cite one example rarely appreciated but noted by some. It seems that in the period 1997 to 2007 there has been something in the order of a doubling of the labour available for employment in the world. This has not been accompanied by a doubling in oil output, energy, or real wealth, or for that matter water or food supplies. Also, whatever maybe happening in the West the increase is still going on and unmatched by the rise in the rate of resources available. Indeed, there are a lot of suggested “peaks” in many key resources.

It is arguable that this feature is one of the key factors behind the recent crash since this rise in labour availability to a great extent was discounted and disguised by monetary expansion that went hopelessly out of control. Given that some of the places where this rise has occurred and others where it is evident have much larger populations that some developed countries sooner or later they are going to feel the effects on the general functioning of wealth of their economies.

How can we attempt to control this? It will depend on how far we are in control of our own economy and own affairs. So, who "owns" the UK? This is in the sense of the real productive assets in industry and commerce. Much of this is now held outside the UK one way or another. The other "ownership" is the public sector, but if this is dependent on government, agency and municipal debt then who are the creditors? It is no good trying to go to old theories to find and deliver comfortable and soothing answers, because there are none to be had.

And I can assure you that nobody, especially those most insistent that they do know, will have any realistic ideas about what happens next.
Posted by Demetrius at 17:20