A Far Away Country 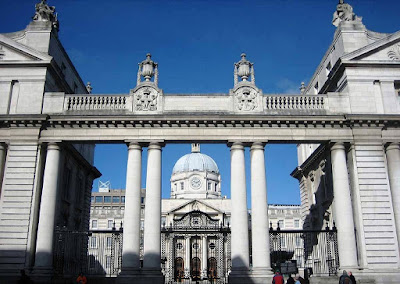 At www.dailybail.com today under “Blood In The Streets” there is footage of the riots at Leinster House in Dublin. They look to have been very ugly as protesters demonstrated at the continuing bail out of the banks and finance houses whilst heavy cuts to public spending are being made. Leinster House is the home of the Dail Eirann, the elected lower assembly of the Republic of Ireland.


Because of the large scale coverage in the UK Media of the comings and goings of who are to be the people in London who administer the instructions from Brussels and Berlin for the UK these riots have been ignored. But they are an expression of the growing resentment of the reductions being made, the likelihood that they will last a long time, whilst between Ireland, London and the EU steadily increasing sums from Irish taxpayers are going to prop up banks and finance houses.


Dublin is in a far away foreign country that we take little notice of these days save for the occasional imported celebrity. Perhaps there may be lessons for us. In the meantime I am off to the Post Office to meet a few friends.
Posted by Demetrius at 16:06